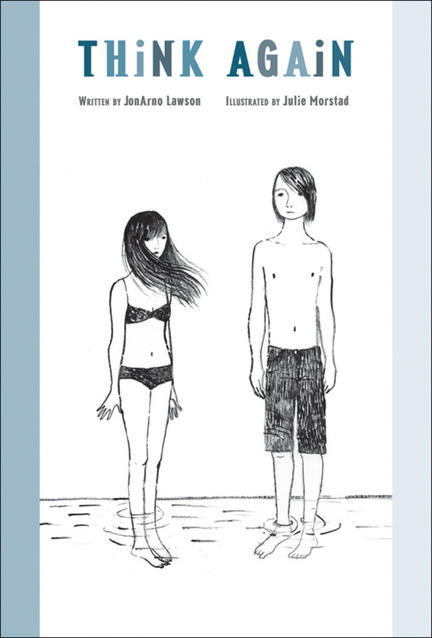 Make sure that your heart Isn't too well-defended. Your heart is designed To be broken and mended. --- “The Heart”

These quietly beautiful and surprisingly humorous four-line poems reveal the many aspects of first love --- the longing, the frustration and the joy. The poet writes not from a single point of view but instead embraces the duality of first love, alternating between the perspectives of a boy and a girl. The poems and revealing illustrations by Julie Morstad combine to inspire young readers to think ... and think again.

Lawson's writing is spare and humourous, and he captures universal feelings whose force never seems as huge as in adolescence.

It is filled with witty, insightful, playful, and ontarget poems. ThinkAgain should be forced into the hands of every sensitive, soul-searching teen. They might even mumble a thank you for it.

He focuses on mind and heart, bringing a warmth and depth of reflection that seems to open our brain, cells to new perceptions --- just what poetry is there for.

While the illustrator's spare grayscale drawings curiously stitch more of a narrative thread through the volume than the poems suggest, they effectively amplify the tension they masterfully depict.

If children’s poetry fans aren’t familiar with Toronto poet JonArno Lawson, they need to be. He is the fellow who brought us these clever collections of children’s poetry: The Man in the Moon-fixer’s Mask, Black Stars in a White Night Sky and A Voweller’s Bestiary. In his fourth poetry collection for young people, he shares 48 poems which chronicle the journey of a boy and a girl as they navigate the peaks, valleys and in-between terrain of first love.

A poem entitled “The Heart” gives a taste of the collection: “Make sure that your heart / Isn’t too well defended: / Your heart is designed / To be broken and mended.” Though all of the poems are quatrains, Lawson’s use of several rhyme schemes (i.e. aabb, abcb, abcd) prevents the collection from growing monotonous.

Julie Morstad’s black-and-white line drawings, rendered in pen and ink, enhance the quiet and pensive mood of the poems. I will leave you to linger with the book’s title poem: “Eventually a thought will come / But no one can say when: / If you think thinking’s easy, / Think again.”

First love can be confusing and difficult. In this collection of beautiful four-line poems, author JonArno Lawson explores the thrills and disappointments of first love. Julie Morstad’s simple, understated line drawings add strength and visual depth to the poems.

You don't have to settle for less in literary quality if you want to match a boy to a book.

A gallery of illustrations by Julie Morstad, winner of the 2014 Marilyn Baillie Picture Book Prize.