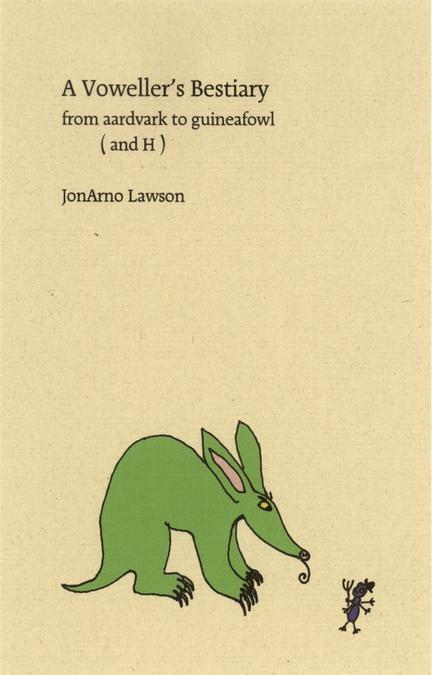 [ Lipogram: a composition from which the writer rejects all words that contain a certain letter or letters. ]

JonArno Lawson, addict of wordplay and lover of children's poetry, has created a collection of lipograms written for children. The idea behind A Voweller's Bestiary is a simple one: an alphabet book based on vowel combinations, rather than on initial letters. This is vowel language applied to the animal kingdom.

'Taking cues from Dr. Seuss, Richard Wilbur, bp Nichol, Christian Bok and others, JonArno Lawson offers a book for children (and their adults) based on a love of wordplay and the self-imposed restrictions of the lipogram -- words and sentences using only a limited set of vowels.

'A Voweller's Bestiary is an alphabet book based on vowel combinatiuons, rather than initial letters.

'Add to these lighthearted poems Lawson's charming illustrations and you have a book that will delight children as it teaches them about the sounds of language.'

'Crafting exquisite verse for children using the themes of the alphabet and the animal kingdom, A Voweller's Bestiary is sure to entertain, educate, and please child readers. Highly recommended for community library poetry collections.'

'Lawson's wordplay exactly achieves his intent. He makes us pay attention to words as words, to letters as letters, the miracle that is communication from the smallest scratches on the page to the biggest ideas we can muster. He also makes us puzzle through a series of rich, eccentric juxtapositions, to practise in our minds that very ''lively rigour'' hailed by the Lion and the Unicorn jury.'

'The reader will first be amused by the images and rhythms of the poems in this book and delighted with its focus on animals. Deeper pleasure awaits, though, in noting Lawson's careful selection of words. As he explains in his afterword, his intention was to create an ''alphabet book based on vowel combinations, rather than initial letters,'' but that was only the beginning. The poems combine extraordinary skill with language along a great imagination and sense of humor. The collection is sure to delight children and adults on several levels.'

'This is a children's book, and I don't know from children. The vocabulary is recondite, perhaps because of the constraint, perhaps because the author isn't interested in dumbing it down for kids, perhaps because he trusts that the sheer fun of the sounds and the wordplay will entertain kids during passages where the grammar is so torqued or the words so obscure that they will have a hard time parsing it. Or perhaps this is a children's book for adults, for those of us who are unafraid of the arbitrary marking of wordplay as childish, who like to exercise our tongues and our minds with the material of language, and whose imaginations, such as they are, tend towards making everything cartoonish and violent. And for those of us who enjoy simple and cute line art, or good ''macaque'' jokes. But will this book make a good Christmas present for an eight-year-old boy? Those of you with such children in your life, please, go out, get this book, read it to them, and report back to me, ideally in time for my holiday shopping.'