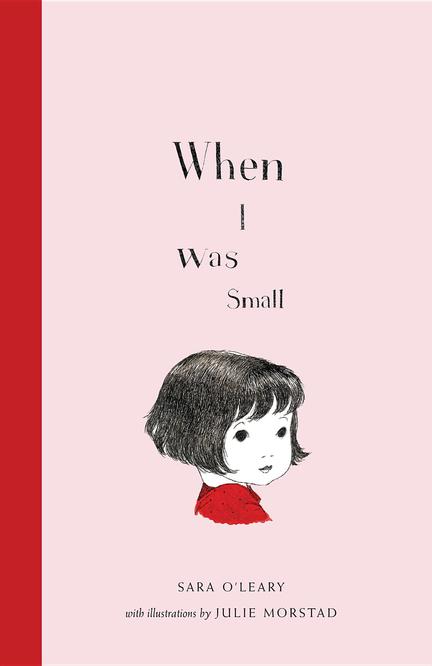 The third book in the critically acclaimed, award-winning series from powerhouse talents Julie Morstad and Sara O’Leary is now available in paperback! Curious little Henry from the award-winning books When You Were Small and Where You Came From has a new question for his mother in this charming new picture book. “What was it like when you were small?” he asks. His mother proceeds to describe her adventures to him, all about when she was little – very little!

Sara O'Leary is a writer of fiction for both adults and children. She is the author of the award-winning series of Henry books and This Is Sadie, illustrated by Julie Morstad, and You Are One, illustrated by Karen Klassen. A graduate of the UBC Creative Writing Program, she has taught screenwriting and writing for children at Concordia University in Montreal.

The Toronto Star:
There are lots of picture books on the theme of "what it was like when you were small, but in this case the mother jumps us into a world of delightful exaggeration. "When I was small," she tells little Henry, "my doll and I wore the same size shoes... I went swimming in the birdbath... I slept in a mitten..." Morstad's fine, delicate drawings enhance this Thumbelina-like fantasy, which plays with the relationship between youth and stature. Morstad's tiny girl with big eyes and bobbed hair evokes a young miss of the 1920s - very stylish.

Quill and Quire Review:
Ever curious Henry, whose enquiries about the recent past formed the basis of Sara O’Leary and Julie Morstad’s previous collaborations, When You Were Small and Where You Came From, has another question for his mother, this time asking her for a story about when she was small. Henry’s mother answers with a series of very short, beautifully bizarre anecdotes delivered at the pace of one per page.
The book takes the idea of Henry’s mother being “small” literally – she is pictured skipping rope with a ball of yarn, swimming in a birdbath, and standing on a spool of thread. The dreamy quality of both text and image gives the book a slightly low-energy feel, but it may be the perfect thing for a kid who is just a little quiet, a little shy, but still inquisitive – a child not unlike Henry. The result is a perfect antidote for parents whose retinas have been scorched by too much Dora the Explorer. Small visual details, such as the frequent hand-lettering and the spot illustrations, add to the book’s quiet impact. The framing of the narrative, with Henry’s question at the beginning and his mother’s comments at the end, gives kids something concrete to hang onto throughout.
When I Was Small is not only a charming picture book, but by focusing on the parent’s past instead of the child’s, it also has the potential to be a great conversation starter.

Calgary Herald:
Children, (at least my children, ages five and eight), will take great delight in thischarming little book. The simple, 1950s-style illustrations add to the quirky story that a mother tells her child about when she was, literally, "small." It's fun to see the scenarios she paints about a little girl who wore a daisy for a sun hat, feasted on a single raspberry, lived in a dollhouse and had a ladybug for a best friend.
Montreal Gazette, When I Was Small, by Montreal’s Sara O’Leary (Simply Read Books, 32 pages, $18.95), has nothing to do with letters or books – unless you count the opening page, in which Henry is looking through a photo album, wishing he’d known his parents when they were small. “Tell me a story, he begs his mother. Tell me a story about when you were small, too.” And she does. “When I was small ... my name was Dorothea,” she says. “But because the name was too big for me, everyone called me Dot.” And so it starts, a story that grows progressively more whimsical – and owes a lot of its warmth and whimsy to the wonderful, quirky, scratchy pen-and-ink art of Vancouver’s Julie Morstad. The image accompanying that opening statement by Henry’s mom, for example, shows a class photo that includes a teeny, tiny girl dressed in red. Dot. “When I was small,” she tells Henry as she tucks him into bed for the night, “I couldn’t wait to grow up. Because I knew one day I would have a small boy of my own.” A beautiful book, and perfect companion to Where You Came From (2008) and When You Were Small (2006) by the same author/illustrator team. For ages 3 to 8.

When I Was Small

Curious little Henry from the award-winning books, When You Were Small and Where You Came From, has a new question for his mother: “What was it like when you were small?” Children will delight in the imaginative tale his mother weaves for him and the simple line drawings of Julie Morstad.

Other titles by Sara O'Leary

Coming of Age With This is Sadie

Sara O'Leary on Sadie as bildungsroman, the wisdom of five-year-olds, the genderization of play, and reading and empathy. Sara also suggests Sadie's …