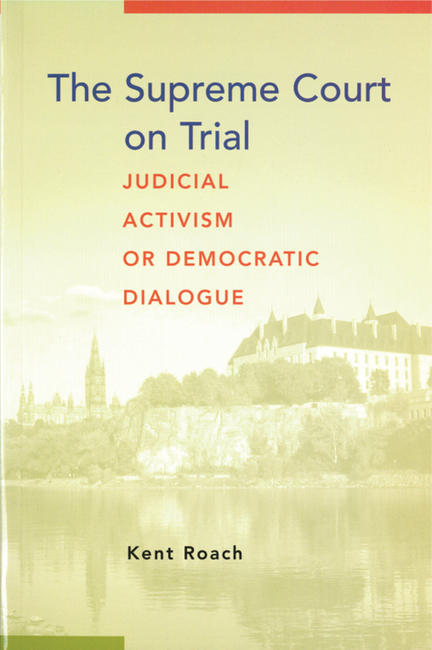 The Supreme Court of Canada has been accused of allowing criminals to go free; of permitting tobacco companies to advertise; of being too sympathetic to Aboriginal people; and of usurping democracy on abortion and gay rights. Some critics claim that the nine unelected judges on Canada's highest Court have used the Canadian Charter of Rights and Freedoms to impose their own views on public policy over those of elected governments. This book joins the crucial debate about the Charter, the Court, and Canadian democracy by asking important and timely questions: What is judicial activism? Is the Charter making us like America where the politics of the judges can determine the outcome of a national election? Can judges simply read their own political preferences into the Charter? Does the Court have the last word over democratically elected legislatures? Are our judges captives of special interests? What can Canadians and their governments do if they think the Court has got it wrong?
In a clear, engaging, and thought-provoking manner, author Kent Roach strips away the rhetoric that has characterized much of the debate over judicial activism. As counsel who has appeared before the Court in several of its most important Charter cases, he provides unique insights into the work of the Court. As a leading professor of Constitutional and Criminal Law, he offers an informed assessment of the Court's decisions and their impact on our legal and political system. In short, The Supreme Court on Trial makes an important contribution to understanding the role of the Court and the Charter in our democracy.

"[The courts'] dilemma has been how to reconcile their new role as active guardians of fundamental values with the democratic values and traditions of Canadian society.... ...An excellent and sophisticated guide to this continuing challenge is offered by Kent Roach in The Supreme Court on Trial: Judicial Activism or Democratic Dialogue (Irwin Law, 2001).... Roach puts forward a balanced approach that insists that activism is less about whether judges rely on political preferences at all and more about the sources of such values and the extent to which they rely on them."