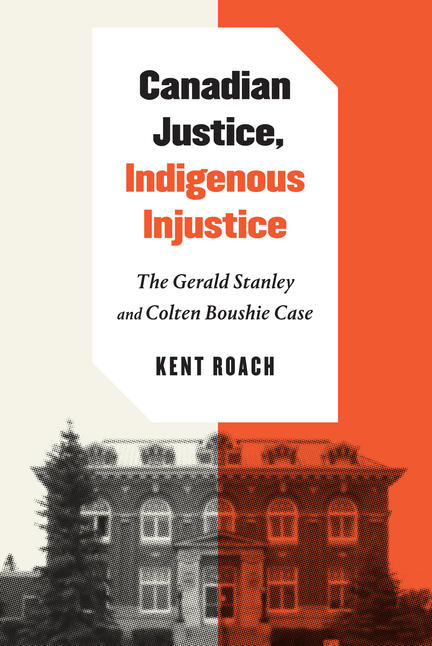 In August 2016 Colten Boushie, a twenty-two-year-old Cree man from Red Pheasant First Nation, was fatally shot on a Saskatchewan farm by white farmer Gerald Stanley. In a trial that bitterly divided Canadians, Stanley was acquitted of both murder and manslaughter by a jury in Battleford with no visible Indigenous representation. In Canadian Justice, Indigenous Injustice Kent Roach critically reconstructs the Gerald Stanley/Colten Boushie case to examine how it may be a miscarriage of justice. Roach provides historical, legal, political, and sociological background to the case including misunderstandings over crime when Treaty 6 was negotiated, the 1885 hanging of eight Indigenous men at Fort Battleford, the role of the RCMP, prior litigation over Indigenous underrepresentation on juries, and the racially charged debate about defence of property and rural crime. Drawing on both trial transcripts and research on miscarriages of justice, Roach looks at jury selection, the controversial “hang fire” defence, how the credibility and beliefs of Indigenous witnesses were challenged on the stand, and Gerald Stanley's implicit appeals to self-defence and defence of property, as well as the decision not to appeal the acquittal. Concluding his study, Roach asks whether Prime Minister Justin Trudeau's controversial call to “do better” is possible, given similar cases since Stanley's, the difficulty of reforming the jury or the RCMP, and the combination of Indigenous underrepresentation on juries and overrepresentation among those victimized and accused of crimes. Informed and timely, Canadian Justice, Indigenous Injustice is a searing account of one case that provides valuable insight into criminal justice, racism, and the treatment of Indigenous peoples in Canada.

"Timely, useful, and authoritative, Canadian Justice, Indigenous Injustice offers a thoughtful and balanced discussion of the evidence and the issues behind a highly controversial topic. A worthy and important study." Ken S. Coates, University of Saskatchewan and co-author of Land of the Midnight Sun

"Highly readable and very timely, Canadian Justice, Indigenous Injustice exposes a court system that, when it comes to Indigenous people, gets it relentlessly and repeatedly wrong and struggles in vain to end generations of hostility, bias, and alienation." Kirk Makin, former Globe and Mail justice reporter and author of Redrum the Innocent

"Meticulous detail is presented on the pernicious reality of racism, colonialism, and Indigenous 'injustice.' Professor Roach dissects the trial process for Gerald Stanley and draws from a series of similar cases. He identifies the persistence of dropped threads, missed opportunities, and decisions to set aside deeper issues of historic injustice and systemic discrimination." Mary Ellen Turpel-Lafond (Aki-Kwe), director of the Indian Residential School History and Dialogue Centre and professor at the Peter A. Allard School of Law, University of British Columbia