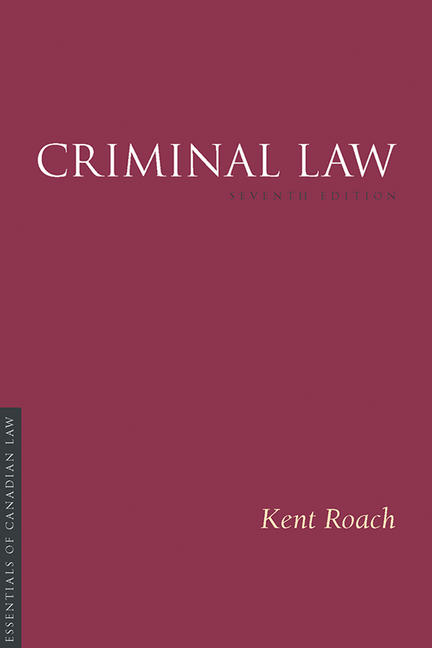 Since publication of the first edition in 1996, Criminal Law by Kent Roach has become one of the most highly regarded titles in Irwin Law’s Essentials of Canadian Law series. Professor Roach’s account of the current state of substantive criminal law in Canada has become essential reading not only in law schools but also among judges, practitioners, and others involved in the criminal justice system.

The seventh edition of Criminal Law has been thoroughly updated to include new developments such as the interaction of the legal rights in the Charter with the reasonable limits provision in section 1 of the Charter in R v KR, disagreements between the Ontario Court of Appeal and the Manitoba Court of Appeal about whether the exclusion of murder from the offence of duress can be justified, new developments in the offence of infanticide, and the relation of the due diligence defence to statutory standards.

The discussion of provocation has been updated and simplified to take into account the Supreme Court’s and Parliament’s recent restriction on the controversial defence. This new edition also has been revised to include important decisions from the Alberta and Nova Scotia Courts of Appeal and Parliament’s enactment of Bill C-51, which makes several changes to sexual assault offences.