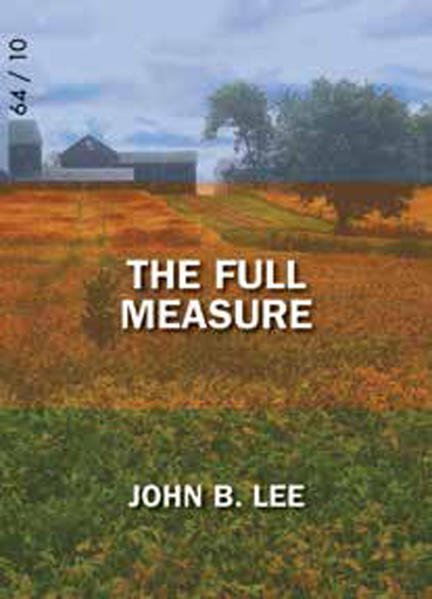 John B. Lee has led a five—dog life, and this collection of poems spans that full measure. From the boy with his first dog leaping his lap to lick his face with that jubilant worming of spine that comes when dog and boy were both young, to the old man walking his fifth dog on the beach, this life journey illuminates how we see the world from first days until the seventh morning. His mother is both the young wife enduring standing—room only Detroit Red Wings hockey game on her honeymoon in Detroit City, and the elderly woman in the memory room at the retirement home wondering about the impossible existence of blue butterflies. His sister is his hop scotch companion going one foot, two foot, one in a game played under heaven's blue theatre. His father and uncle who share ownership of the farm he grew up on are transformed by time from handsome young men with big car dreams into those who come to feel mostly the fear of falling and the breaking of bones. And what we have then in these fine poems is the presence of absence. In the words of the opening poem, Lee states of himself — "though I was once time's sweet darling, now I am remembering more, imagining less." This award—winning collection is a lamentation of loss we experience if we are blessed to live a long enough life and a celebration of how life deepens us if we are blessed with the capacity to appreciate the lessons life allows us to learn. Sometimes those lessons are hard. Still, like the wirewalker setting out over the cable stretched across Niagara Falls in a poem of that name, if we dare venture we are carried forward by brave motion where any moment we might fall beyond knowing. And as it is stated in a later poem if we believe in loving we might experience "the way it melts away/the way it stays." For their part the judges of Lee's award—winning poem "Bringing the Farmhouse Down" wrote of John B. Lee's work as being "reminiscent of Hopkins … Ted Hughes or Galway Kinnell," fine praise for this Canadian poet in his prime.