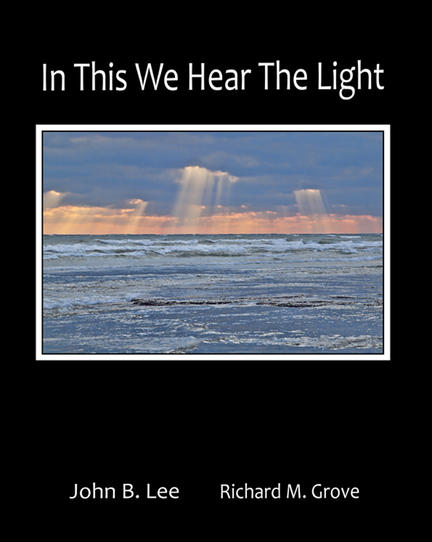 World-class poet, John B. Lee, published with world-class photographer, Richard M. Grove, to produce a world-class hard cover book of splendor called In This We Hear the Light.

In This We Hear the Light, is an exceptional collection of Cuba theme poetry by award winning poet, John B. Lee, – without a doubt some of his most outstanding work, juxtaposed by an equally splendid assembly of Cuba theme photography by Richard M. Grove. The poems and photographs represent the inspiration from many years of travelling in Cuba. Since first traveling to Cuba, John B. Lee came to love the island and to admire her people. In This We Hear the Light, is an ekphrastic project, its literary efforts are beautifully complemented by Grove’s exquisite world-class photographs. The poems and the photographs aspire to capture something more deeply felt than the reflections of a mere tourist. Poetry and photography both hold the deep felt mysteries that come from understanding Cuba on an intimate and cherished level.

Richard (Tai) Grove, known as Ricardo by his Cuban friends has never been satisfied to be a mere tourist in that island nation.  In establishing the Canada Cuba Literary Alliance, (more often referred to as the CCLA), he committed himself to beginning and sustaining a conversation between writers and poets in Cuba and those fortunate Canadians who have come to share in this conversation.

Excerpt: In This We Hear The Light (by (author) John B. Lee; photographs by Richard M. Grove)

2 Forwards
Forward for book from John B. Lee:

The poems gathered within the covers of this collection represent writing inspired by my having traveled to and sojourned in Cuba five times between 2009 and 2011. On those occasions I stayed briefly in a casa particular in Holguín, at seaside resorts near Guardalavaca and near Santiago de Cuba, and I made a return visit to Hotel Tropicoco, a place I fondly refer to as my grand old Russian lady gone to seed located on the coast twenty minutes by car outside of Havana. Most often, I traveled to Cuba in the company of my wife and fellow Canada Cuba Literary Alliance members, though on one occasion I was a guest of Stella and Graham Ducker as a delegate at a language conference co-hosted by University of Holguín in Cuba and University of Western Ontario in London. Since first traveling to Cuba in 1992 I have come to love the island and to admire her people. Tropical beauty always inspires, but more than that, I cherish time spent with my Canadian companions and our mutual Cuban friends, most particularly my friend and sometime literary collaborator Manuel León. In This We Hear the Light, is an ekphrastic project, its literary efforts beautifully complemented by Tai Grove’s exquisite photographs. Along with Island on the Wind-breathed Edge of the Sea, it contains poetry that aspires to capture something more deeply felt than the musings of a mere tourist. Among the many relationships I have forged with CCLA members, I am most grateful for my ongoing friendship with president Tai Grove. I harbour a deepening respect and veneration for my Cuban friends, most particularly my regard for Manuel and his family, for Wency Rosales and his family, and for all the other friends Cathy and I have made over the many occasions of our return to that beloved island.

DIV style="FONT-SIZE: 16px; MARGIN: 0cm" align=center>from “And For All That”

When I was asked by, friend and fellow poet, John B. Lee to collaborate on this book I was first thrilled and then honoured. The previously similar book was with esteemed poet and editor, James Deahl. The title was, North of Belleville and was a very different book, mostly with realistic nature type of photographs. This book I instantly envisioned as pushing the boundaries of photography into digital painting. Since I was thirteen-years-old I have considered one of my callings to be a photographer. With help and encouragement from my artist father I bought my first single lens reflex camera. The agreement was that if I saved half of the cost of the camera he would pay for the second half. In short order I was the proud owner of a Practica Super TL – an affordable German-made camera. John presented me with his manuscript – In This We Hear the Light – I instantly saw a compatibility, a sympatico, between many of my images and the poems in the collection. Email to John: dear john - thank you for your poems for - in this we hear the light. i have only read to page 14 so far - i am enjoying them very much. as i read i am seeing some common photography themes and am wondering if i should create sections of poems and sections of photographs. i was originally thinking of linking a single photograph with a single poem, now i am thinking that this would be too much of a pictorially narrow representation of a poem or even the other way around, too much of a poetically narrow representation of a photograph. i am thinking that if we group poems and photographs throughout the book that it might get around the one on one representation issue. i don’t have any specific ideas at this moment as to how many of each in a group but I think that will naturally fall in place. because this project was your conception i wanted to ask about your concept of "photograph". how photographically realistic are you thinking? i manipulate just about every photograph i take to some degree or another. some very little and some are manipulated out of the realm of photography into what i call digital paintings. do you have a particular idea of how realistically you would like to see the images? sometimes a bird is a bird is a bird and sometimes it is positive and negative space and sometimes it is juxtaposed colour fields of energy. i have attached a couple of images that show how broadly I would like to interpret the word photograph for this book. In the end John and I sat at my computer for many hours poring over my thousands of images looking for just the right image. This was a very rewarding part of publishing this book. I am thrilled with the concept, the process and the end result. I hope the reader is as satisfied the end result as I am.

Other titles by Richard M. Grove

Cuba's Blue Sky In My Pocket