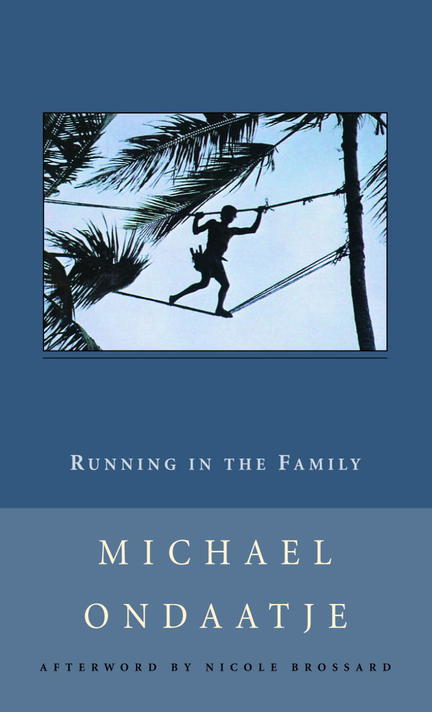 In Michael Ondaatje’s beloved family memoir, fact and fiction blur to create a dazzlingly original portrait of a lost time and place. Ondaatje left Ceylon (now Sri Lanka) at the age of eleven. Almost twenty-five years later, he returned to sort out the recollected fragments of experience, legend, and family scandal, and to reconstruct the carefree, doomed life his parents and grandparents had led in a place where couples danced the tango in the moonlight, where drink, gambling, and romance were the main occupations of the upper class. Rich with eccentric characters and captivating stories, and set against the exotic landscape of a colonial empire in decline, Running in the Family is Ondaatje’s unforgettable journey through memory and imagination to reclaim his past.

“Eloquent, oblique, witty, full of light and feeling.…Ondaatje’s knowledge of the fragility and luck of life is very clear. So, too, is the grace and originality of his prose.”
–The New Yorker

“Ondaatje has produced a remarkable book.…Shimmering through the haze of heat and memory is an impressionistic, sometimes surreal portrait of an exotic time and place now gone, a colonial paradise that had its own rhythms and imperatives.”
–Globe and Mail

“A beautiful, luscious book. Michael Ondaatje has depicted his extraordinary family, who delighted in masks and costumes and love affairs that ‘rainbowed over marriages’ in the kind of language that makes glory of their lives. He has gone on a poet’s journey to Sri Lanka (Ceylon), and the reader who travels with him enters a truly magical world.”
–Maxine Hong Kingston

“It sparkles with the intensity and vividness of its multifaceted tales of romance and intrigue.”
–Fort Worth Star-Telegram
“A brilliant, charming, poetic, hyperbolic holiday of a book.…Ondaatje walks the line between fact and fiction with a delicately rendered delight.”
–Vancouver Province

“…the brilliant and moving book he has written is original in every way that matters.”
–W. S. Merwin

“A beautiful, luscious book of discovery and remembrance.”
–Hamilton Spectator

“With a prose style equal to the voluptuousness of [Ondaatje’s] subject and a sense of humor never too far away, Running in the Family is sheer reading pleasure.”
–Washington Post

“It dazzles with its range of imagination, richness of language and the consistently involving changes of mood and tempo.”
–Toronto Star

“This is an intriguing, funny, dream-like book, impossible to put down.”
–Winnipeg Free Press

“…brief, vivid scenes, moments revived out of remote memories, pictures of the intensities lived by his passionate parents… amid the lush flora, the predatory fauna, and the old-fashioned life of the British colonies. This is great story-telling.…"
–Leon Edel