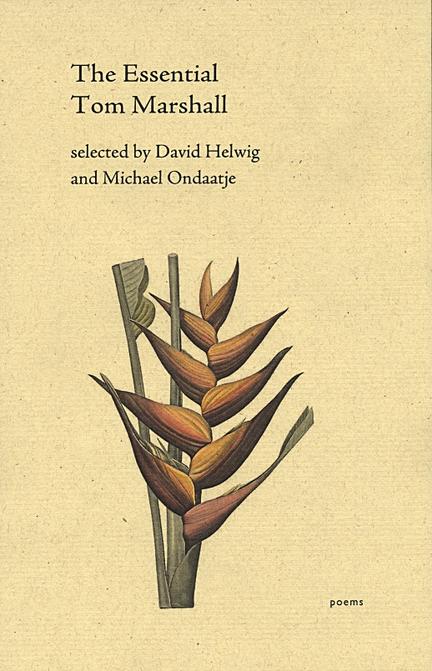 A comprehensive introduction to this enigmatic Canadian poet, The Essential Tom Marshall provides an overview of the breadth of Marshall's career, from the intense, daring poetry of his youth in the 1960s to the reflective work of his later years.

Tom Marshall was born in Niagara Falls, Ontario, in April, 1938. He studied English and History at Queen's University in the late 1950s, returning to the school after graduation to complete a master's degree on the poetry of A M Klein. With David Helwig, Marshall was at the centre of a group of writers active in Kingston, where he began teaching at Queen's in 1964. As a poet, he is known for four linked collections (published between 1969 and 1976) of philosophical, meditative verse. The Silences of Fire (Macmillan 1969) is perhaps the best known of these, though all of them are neatly represented in a fifth book, The Elements (Oberon 1980). Marshall is also the author of seven novels, among them Rosemary Goal (Oberon 1978), a satire of academic and literary life, and Adele at the End of the Day (Macmillan 1987). Most important critically are The Psychic Mariner: A Reading of the Poems of D.H. Lawrence (1970) and Harsh and Lovely Land (1979), an incisive, insightful survey of contemporary Canadian poets and poetry. Marshall died at Kingston in 1993.

Born in Toronto in 1938, David Helwig attended the University of Toronto and the University of Liverpool. His first stories were published in Canadian Forum and The Montrealer while he was still an undergraduate. He then went on to teach at Queen's University. He worked in summer stock with the Straw Hat Players, mostly as a business manager and technician, rubbing elbows with such actors as Gordon Pinsent, Jackie Burroughs and Timothy Findley.

While at Queen's University, Helwig did some informal teaching in Collins Bay Penitentiary and subsequently wrote A Book About Billie with a former inmate.

Helwig has also served as literary manager of CBC Television Drama, working under John Hirsch, supervising the work of story editors and the department's relations with writers.

In 1980, he gave up teaching and became a full-time freelance writer. He has done a wide range of writing -- fiction, poetry, essays -- authoring more than twenty books. Helwig is also the founder and long-time editor of the Best Canadian Stories annual. In 2009 he was named as a member of the Order of Canada.

David Helwig lives in the village of Eldon on Prince Edward Island, where he is the third Poet Laureate. He indulges his passion for vocal music by singing with choirs in Montreal, Kingston, and Charlottetown. He has appeared as bass soloist in Handel's Messiah, Bach's St Matthew Passion and Mozart's Requiem.

The Kennedy profile recumbent
is like a craggy mountain range
rising above the oak casket.

Time's scythe has had its way with her.
The Ancient of Days has drawn a line
around her. She survives herself no more.

For years she had been receding
little by little. She had been
remembered in dreams as younger, stronger.

A shrunken woman, kindly, distant,
not that terrifying sorceress
not yet the strong, protective matrona.

Mother, in your darkness and light
I grew. Your love of music and reading.
Your hatred of space and freedom.

of Kennedys working the land.
Whence comes all that depth of darkness?
From Scotland's internecine turmoil?

Human mysteries persist, deepen.
There is no resolution. Only pain
familiar and defining, strengthening.

With The Essential Tom Marshall, The Porcupine's Quill has once again shown its ability to select and present the best work of poets whose words might otherwise be lost in the electronic ether.

The Essential Tom Marshall embodies two aspirations: to sketch an overview of the poet's career, including less developed youthful work, and to mount a portrait of Marshall in the Canadian canon, based on his better-known material. This slim volume succeeds more as a primer than a definitive guide, but it is nevertheless an important first step in the restoration of a poet well worth getting acquainted with.

'I met Tom Marshall just the once, as I recall. In September of 1992, at the Grand Theatre on Princess Street in Kingston. The occasion was the book launch for Steven Heighton's Flightpaths of the Emperor. Al Purdy was there, and Carolyn Smart. We didn't sell as many books as I had hoped, or John Metcalf had rashly predicted, but then again, we never do. Tom Marshall was just fifty-five years old when he died the following year, so it is with an acute sense of responsibility to community that PQL is happy to partner with novelists David Helwig and Michael Ondaatje in publishing The Essential Tom Marshall.'

?The Essential Tom Marshall does its job incredibly well, celebrating a poetic gift that's both light and intense at the same time – the simple structure and relatively easy language open up the depth and resonance of this work almost immediately.?

'The poems in this posthumous selection would seem to contradict Tom Marshall's own lines: ''Still, words/between the dead and the living/are difficult.'' These poems speak to us now as clearly and strongly as they ever did: unsettled and unsettling, sometimes evasive, often ecstatic, they are now also imbued with the augury of elegy, through no fault of his or our own. Dear Tom, you are still and always ''protected by many [known and] unknown companions.'''

Diane Schoemperlen, author of Man of My Dreams

?[The Essential Tom Marshall] is a book that you enjoy holding while you savour the poems it contains.?

Salon has written about The Porcupine's Quill's Essential series plenty already, and here we are again. This series is a precious examination of poetry in Canada. It is precious as both adjective and noun -- a slim 64 pages and with the subtle elegance of the press's handmade design, they're not to be overlooked and each edition is like a letter to a beloved. This most recent addition, The Essential Tom Marshall, was selected by David Helwig and Michael Ondaatje. I had never read Marshall before, but his thematic roots in the past, history and repetition easily resonate across the expanse from Kingston, Ont., to New Brunswick. Helwig and Ondaatje rightly point out in their foreword, ''Everyone likes to believe that the best of poetry will endure, but it doesn't do so without help.'' The Porcupine's Quill is doing its part, now you must, too.

'Over the two decades since Tom Marshall passed away, his poetry has become increasingly hard to find. The publication of The Essential Tom Marshall is a welcome corrective, restoring to us the poet's best work and also, in some ways, the man himself: psychic mariner, elemental lyricist, interpreter of the silences of fire, author of neglected small masterpieces like 'Autobiographies', 'Summer', 'Politics I & II' and 'We are dying . . .' And Tom demonstrates in poems like 'The Mother' that in a few lines he can render characters as vivid as many fiction writers need a full novel to realize: 'She mouths her pieties/ but she hates God/ with splendid, unrecognized ferocity.' (In that last sentence I see I've used the present tense — Tom demonstrates — where before, when the poems were out of print, I would have used the elegiac past tense. How wonderful that this book makes possible such a restorative conjugation. And how it would delight the poet himself.)'

?The Essential Tom Marshall is ... a lovely book both in terms of its content and its appearance, making it quite a pleasure to read, and the kind of book you'll pull off your shelf again and again.?

Other titles by Tom Marshall

The Major Canadian Poets and the Making of a Canadian Tradition

Other titles by David Helwig

A House in Memory

It Is Always Summer

The Names of Things