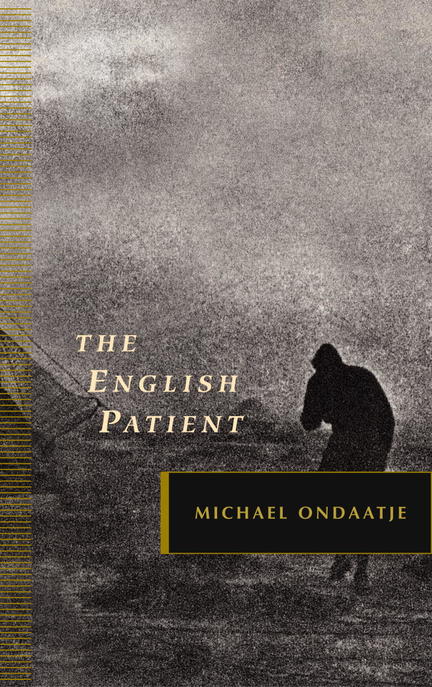 With ravishing beauty and unsettling intelligence, Michael Ondaatje's Booker Prize-winning novel traces the intersection of four damaged lives in an Italian villa at the end of World War II. Hana, the exhausted nurse; the maimed thief, Caravaggio; the wary sapper, Kip: each is haunted by the riddle of the English patient, the nameless, burned man who lies in an upstairs room and whose memories of passion, betrayal,and rescue illuminates this book like flashes of heat lightening.

She stands up in the garden where she has been working and looks into the distance. She has sensed a shift in the weather. There is another gust of wind, a buckle of noise in the air, and the tall cypresses sway. She turns and moves uphill toward the house, climbing over a low wall, feeling the first drops of rain on her bare arms. She crosses the loggia and quickly enters the house.

In the kitchen she doesn't pause but goes through it and climbs the stairs which are in darkness and then continues along the long hall, at the end of which is a wedge of light from an open door.

She turns into the room which is another garden--this one made up of trees and bowers painted over its walls and ceiling. The man lies on the bed, his body exposed to the breeze, and he turns his head slowly towards her as she enters.

Every four days she washes his black body, beginning at the destroyed feet. She wets a washcloth and holding it above his ankles squeezes the water onto him, looking up as he murmurs, seeing his smile. Above the shins the burns are worst. Beyond purple. Bone.

She has nursed him for months and she knows the body well, the penis sleeping like a sea horse, the thin tight hips. Hipbones of Christ, she thinks. He is her despairing saint. He lies flat on his back, no pillow, looking up at the foliage painted onto the ceiling, its canopy of branches, and above that, blue sky.

She pours calamine in stripes across his chest where he is less burned, where she can touch him. She loves the hollow below the lowest rib, its cliff of skin. Reaching his shoulders she blows cool air onto his neck, and he mutters.

What? she asks, coming out of her concentration.

He turns his dark face with its gray eyes towards her. She puts her hand into her pocket. She unskins the plum with her teeth, withdraws the stone and passes the flesh of the fruit into his mouth.

He whispers again, dragging the listening heart of the young nurse beside him to wherever his mind is, into that well of memory he kept plunging into during those months before he died.