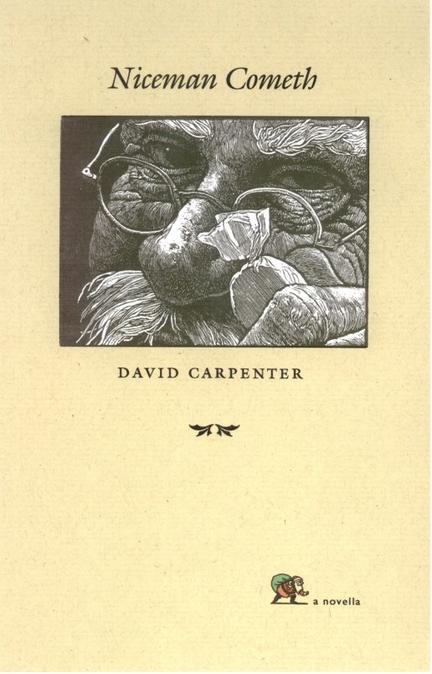 Carpenter's voice captures both the bleakness and the unexpected joys of life. Filled with moments of high humour but grounded by the sense of defeat and rejection that we all face, this novel provides an insight into the human condition, its foibles, its delights and its lunacy.

'All through June and July, Glory clung to the following resolution: under no circumstances would she allow herself to be ambushed by Ricky Bullerd... She might run the risk of seeing him at his old game, trolling for bimbos.... She even resolved never to turn the dial to CHAF Radio, in case she happened to hear his patter on Night Howl.... Ricky was a man with a dream, a golden voice, and a fatal flaw. He was flesh-foolish. He wanted to be loved by great armies of women, he craved it.'

'Veteran Saskatchewan writer David Carpenter is back, this time with Niceman Cometh, a novel about a freshly single mom named Glory making a go of it with her six-year-old, Bobby, as well as dealing with an unforgettably discombobulated cast of characters.

'Terrifically plotted and perfectly paced, this multi-narrated romp dwells lovingly upon one precious, precocious and irresistibly typical preteen's reaction to the string of men who snake through his young life (thanks to his mother's many admirers). As well, its inventive and infinitely compassionate creator also nails a gonzo portrait gallery of characters ranging from the randy radio personality Rickey Bullerd to Glory's co-worker Jolene, mother of her son's playmate, Fern.'

'I am enjoying how the books I've chosen for this year's Canadian Book Challenge (my theme is books set on the Prairies) have had such a sense of place. Saskatoon is coming through clearly, even if I do wonder whether that is just because I'm from Saskatchewan. Would people still be enthralled if they'd never been to Saskatoon? If you've read any of the books I'm talking about, please share your impressions. This particular novel was full of word play, of characters just odd enough to be realistic, of a love of place, of a storyline edged with darkness yet redeemed by hope. Santa really is a nice man here, and the potential inherent in Christmas really delivers. Christmas somehow allows us to lower our barriers of cynicism, just a little, and believe in the possibility of love, of sharing, of kindness. It is the central point which this novel revolves around, both in the sense of timing and in meaning. Kindness and love triumph, in their own particular way.'

'I'm just about done with Niceman Cometh, by David Carpenter. It's not that long a read, and smooth as olive oil on the eyes, but I've been at it for a few weeks, reading slowly like a kid nursing a jaw-breaker, just allowing myself a chapter at a time -- I'm enjoying it that much, I just don't want it to end. It's a wonderful novel, filled with vivid characters and jump-off-the-page writing -- Carpenter handles multiple POV like a rodeo cowboy twirling a lariat. He's such a good writer it's a crime he isn't better known.'

'There is nothing like a rollicking good yarn to take your mind off the economic situation, and Saskatoon's David Carpenter provides just that in Niceman Cometh.'

'Carpenter's voice captures both the bleakness and the unexpected joys of life. ... [A]n insightful exploration of our foibles and deslights.'

'Set in Saskatoon, Niceman has an expansive cast of characters who all revolve around single mother Glory Sachar, an endearing woman unaware of her power over the men of the community. Glory has a knack for attracting unsuitable men, from the extroverted, philandering radio DJ Ricky to the unemployed, stalking downstairs neighbour Jerry. The cast of characters includes Glory's elderly next-door neighbour, her realtor, her customers and coworkers at the cafe where she works, and the nice man of the book's title. In many ways as much a collection of tightly linked short stories as a novel, Carpenter allows every character to focalize portions of the text, but rather than being distracting the effect is a sense of community and interconnection with Glory at the apex. This interconnection is best illustrated by the chapter titled ''Love's Sweet Song,'' wherein all the novel's characters are listening to late night CBC, which is broadcasting a jazz festival from Switzerland. All the major characters are united in their interest in or willingness to try this unique musical experience; the unsuitable suitors Ricky and Jerry alone are symbolically isolated from the community by their inability to appreciate the ''fat-ass government station'' (Ricky's words) that ''could mess with your head if you listened long enough'' (Jerry's thoughts). A mutual appreciation for the strange late night ramblings of the CBC also foreshadows the love that will bloom between Glory and her titular nice man.'

All Is Well: A Reading List by Katherine Walker