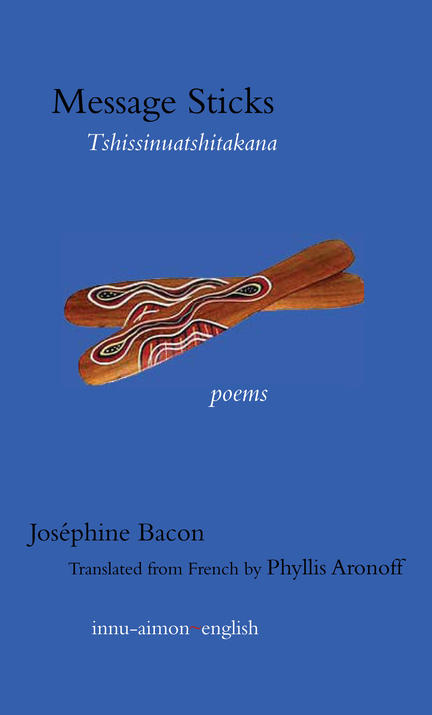 Translated from the French into English by Phyllis Aronoff.

This bilingual work (English and Innu-aimun) is an invitation to dialogue. Message sticks are the signs that allow the nomadic Innu to orient themselves inland and find their way. The poetry brings the language of the nutshimit (the back country) to life again, recalling the sound of the drum. Simple and beautiful, Joséphine Bacon's poetry is an homage to the land, the ancestors, and the Innu-aimun language. Charting unwritten history, it provides a vision into the intensity of the elders' words.

Joséphine Bacon is an accomplished poet, songwriter, documentary filmmaker, and storyteller. She was born in the Innu community of Pessamit and currently lives in Montreal. She is considered an icon of Quebec literature. Well-known internationally, she has been a guest of honour in Colombia, France, Russia, Armenia, Mexico, Scotland and Haiti. The recipient of many awards, she regularly takes part in poetry performances. For more than 40 years, Bacon has given numerous writing workshops and presentations in universities and many Aboriginal communities. Donald Winkler was born in Winnipeg, graduated from the University of Manitoba, and did graduate study at the Yale School of Drama. From 1967 to 1995 he was a film director and writer at the National Film Board of Canada in Montreal, and since the 1980s, a translator of Quebec literature. In 1994, 2011, and 2013 he won the Governor General's Award for French to English translation, and has been a finalist for the prize on three other occasions. His translation of Samuel Archibald's short story collection, Arvida, was a finalist for the 2015 Giller Prize. He lives in Montreal, Quebec.

"Bâtons à message / Tshissinuatshitakana, Joséphine Bacon's first collection of poetry, is one of those books you want to give to a friend, saying, "Here, drink in this light.'" --Denise Brassard, Inter, art actuel

"It is rare that one reads a poet as refined and precise as Bacon, a poet with an authentic and personal voice who truly has something to say, a message to transmit and share." --Jean-Sébastien Ménard, Terra Nova

"On the brink of catastrophe, the poet always finds the way of beauty." --Jade Bérubé, La Presse

Other titles by Joséphine Bacon