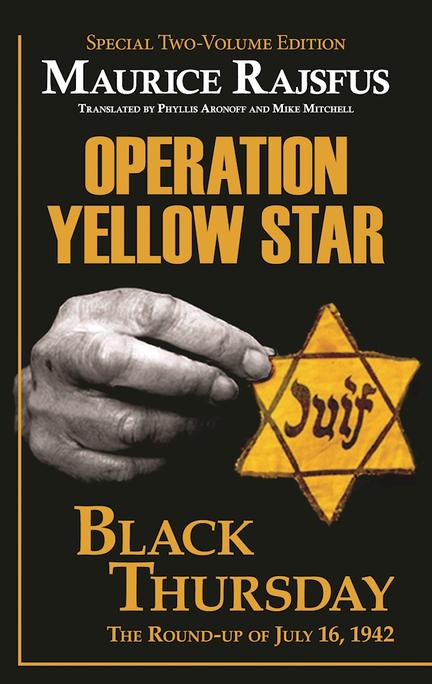 A two-volume book in which Maurice Rajsfus, a French activist and former investigative journalist forLe Monde, shares his research and personal recollections in order to shed new light on France's role in the Holocaust. In the first volume, "Operation Yellow Star," Rajsfus meticulously analyzes archival documents, demonstrating the extent of police collaboration with the Vichy regime and how it facilitated the persecution, deportation, and ultimately the death of hundreds of thousands of Jews. Examining long-unseen arrest records and transcripts, Rajsfus seeks to understand how and why many averageFrench citizens resisted Nazi occupation while others were willingly complicit. In the second book, "Black Thursday," Rajsfus recounts his own experiences of July 16, 1942, when he and his family were arrested as part of the Vel’ d'Hiv roundup, the largest ever in France, of 13,000 Jews. While most of those detained during the two-day sweep eventually died in Auschwitz, the author survived and has spent the rest of his life grappling with his country's betrayal. Together, the two volumesby Rajsfus offer a damning exposé of the bureaucracy of genocide, laying bare how cultural bias, political self-interest, and the influence of right-wing media led to the implementation of the Yellow Star as a segregationist device and determined France’s culpability in the Holocaust.

Maurice Rajsfusis the author of thirty books and from 1994–2012 he created and circulated "Que fait la police," a "Cop Watch" bulletin detailing human rights abuses. He lives in Paris with his wife, sons and grandchildren.

Phyllis Aronoff lives in Montreal. She has a Master’s degree in English literature. The Wanderer, her translation of La Québécoite by Régine Robin, won the 1998 Jewish Book Award for fiction. She and Howard Scott were awarded the 2001 Quebec Writers’ Federation Translation Award for The Great Peace of Montreal of 1701. She is currently president of the LTAC.

Other titles by Phyllis Aronoff

A Slight Case of Fatigue ebook