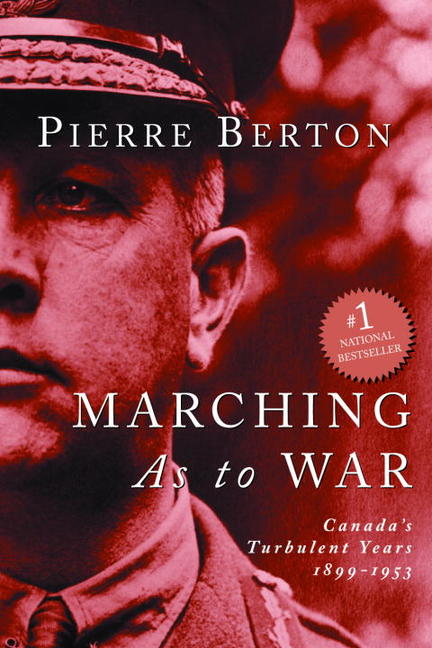 “I have called this period Canada’s Turbulent Years – turbulent not only because of the battles we fought on the African veldt, the ravaged meadows of Flanders, the forbidding spine of Italy, and the conical hills of Korea, but turbulent in other ways. These were Canada’s formative years, when she resembled an adolescent, grappling with the problems of puberty, often at odds with her parents, craving to be treated as an adult, hungry for the acclaim of her peers, and wary of the dominating presence of a more sophisticated neighbour.” – From the Introduction

Canada's twentieth century can be divided roughly into two halves. All the wars and all the unnecessary battles in which Canadian youth was squandered belong to the first — from the autumn of 1899 to the summer of 1953. From the mid-1950s on, Canada has concerned itself not with war but with peace.

The first war of the century, which took Canadian soldiers to South Africa, and the last, which sent them to Korea, bracket the bookends on the shelf of history. They have a good deal in common with, these two minor conflicts, whose chronicles pale when compared to the bloodbaths of the two world wars.

Canada's wartime days are long past, and for many, the scars of war have healed. Vimy has been manicured clean, its pockmarked slopes softened by a green mantle of Canadian pines. Dieppe has reverted to a resort town, its beaches long since washed free of Canadian blood. Nowadays, Canadians are proud of their role as Peacekeepers, from which they have gained a modicum of international acclaim the nation has always craved, with precious little blood wasted in the process.

In this monumental work, Pierre Berton brings Canadian history to life once again, relying on a host of sources, including newspaper accounts and first-hand reports, to tell the story of these four wars through the eyes of the privates in the trenches, the generals at the front, and the politicians and families back home. By profiling the interwar years, Berton traces how one war led to the next, and how the country was changed in the process. Illustrated with maps and line drawings, Marching as to War describes how the experience of war helped to bind Canada together as a nation and chronicles the transformation of Canada's dependence upon Great Britain and its slow emergence as an independent nation caught in a love-hate relationship with the United States.

The last war fought on Canadian soil ended in August 1814 when an invading United States army — unpaid, mutinous, diseased, and dispirited — skulked out of Fort Erie and vanished across the Niagara frontier, never to return. For the remainder of the nineteenth century, Canada basked in its reputation as the Peaceable Kingdom: no Crimean adventure for her, no Caribbean crusade, no pitched battles save for a few skirmishes with the Fenians and the Métis.

That untroubled era ended with the Victorian Age, followed by half a century of turbulence — the most remarkable period in our past. Between the autumn of 1899 and the summer of 1953, young Canadians marched away, not once but four times to do battle in far-off fields, in wars that were not of our making. Only in this one period have we devoted nearly 30 percent of our time to war.

Turbulent years, indeed! And not only because of the battles we fought on the African veldt, the ravaged meadows of Flanders, the forbidding spine of Italy, and the conical hills of Korea: turbulent because these were Canada’s formative years, when she resembled an adolescent groping with the problems of puberty, often at odds with her parents, craving to be treated as an adult, hungry for the acclaim of her peers, and wary of the dominating presence of a more sophisticated neighbour.

The change was spectacular. In half a century we were transformed from an agricultural nation, where the Masseys became quasi-aristocrats simply by getting rich selling farm machinery, to an industrial economy with a bedrock of natural resources. Canada, one of the least military nations in the West, was forced to cope — always at the last moment — with unexpected conflicts for which she was never properly prepared. In doing so, the nation grew up.

In the long tug of war between the forces of history and geography that marks those years, geography, in the end, won out. When the Boer War broke out on the eve of the new century, we were a vassal state within the British realm, cheerfully rushing to the colours when the imperial trumpets sounded. Over the years the emphasis shifted. When the Korean War began in 1951, we found ourselves giving token support to American troops in what was essentially an American conflict.

In addition to war, two other tremors rattled the foundations of the emerging society. The first was the sudden, almost explosive creation of a new Western empire, stretching from the Shield to the Rockies, that would upset the political balance of power. The second was French Canada’s burgeoning nationalism, which emerged at the outset of the South African conflict and reached its apogee in the conscription crises of the two world wars that followed.

As early as 1890, when the new province of Manitoba launched its plan to keep the French language out of its schools, the West had signalled its reluctance to accept the bilingual accord stitched together at Confederation. Thus the country found itself split down the middle — East versus West, French versus English, prairie farmers at odds with central Canadian capitalists. In war, it has been said, we found our maturity. It is equally true that in war we came close to tearing ourselves apart, creating a series of political crises that are still at the root of our national dilemma.

Our love-hate relationship with our neighbour mirrored our own international uncertainty in those early years. What, we asked, is a Canadian, anyway? British? American? French? Free trader? Protectionist? We couldn’t be sure. The Great War victories symbolized by a single magical word, Vimy, made us cocky. But the wave of cultural nationalism that followed was diluted by a nineteenth-century literary mindset inherited from Mother England. Realism? We scorned the hard-boiled Yankee style. Four years of wartime propaganda had conditioned us to swallow the most preposterous lies and the most audacious masquerades. The Great War had helped transform the Age of Faith into the Age of Gullibility.

A giddy optimism pervaded those roller-coaster years of boom and bust, war and peace, dogma and doubt. In the days of the Last Best West, Wilfrid Laurier claimed that the new century belonged to Canada and predicted five transcontinental railways and a population of 100 million people by the millennium. The Great War shattered the dreams of the railway builders. A generation later the Great Depression burst the bubble of the dizzy twenties. Ironically, it took a new war to get us out of the slump.

Peace at any price? That was the cautious view of the Depression politicians, alarmed at the appalling bloodletting of 1914—18 and also at the cost of a military buildup, not just in dollars but also in “national unity,” the all-Canadian buzzword. To its shame, the Canadian government opted for appeasement at the very moment when its own man at the League of Nations was calling for tougher sanctions on the international bullies. Thus a new war — a sequel to the old one — became inevitable.

There is a paradox here. Canada has entered each of its four wars with hesitation and reluctance. We have produced only one first-rate general — Arthur Currie — and treated him shabbily. Yet at the outset of each conflict, Canadians have enlisted in astonishing numbers, drawn as much by the enthusiasm of youth as by a sense of duty. On each occasion our military leaders and politicians have misjudged the dimensions of the conflict. Home by Christmas! Young men eager to see action before the war’s end have believed that flawed forecast. And Canadians, with their allies, have trusted the judgment of certain charismatic generals — Haig, McNaughton, Mountbatten, Montgomery, MacArthur — who let their own hubris cloud their vision with disastrous results.
Save for a few months at the ends of the two major wars, Canada’s effort has been voluntary, making this country something of an international oddball. We have always started from scratch, unprepared, unoutfitted, and largely untrained. The miracle is that we have managed to turn a tiny peacetime army into a massive fighting force, far larger than could have been imagined when the first shots were fired. We sent green soldiers into battle and learned that, trained or not, Canadians will always fight fiercely and with courage.

“Pierre Berton entertained me royally. . . . Berton uses newspaper reports, memoirs, diaries and personal reminiscences with panache, leading us over vast historical terrain through the eyes of protagonists who were there.” -- Modris Eksteins, The Globe and Mail

“A superb testament to Berton’s prowess as a writer and an historian.” -- Calgary Herald

“Chock full of keen observation and interesting detail; a glance back at war from one of the country’s most eminent popular historians.” -- The London Free Press