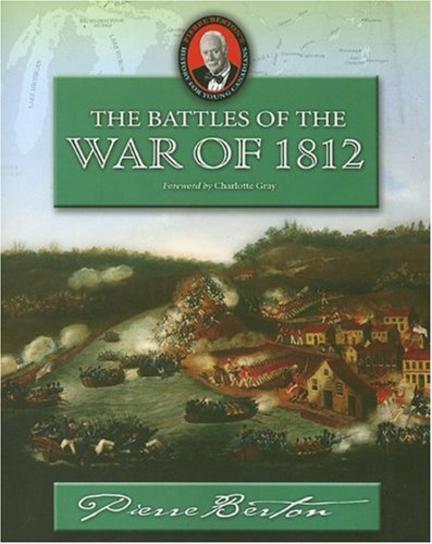 The third omnibus in the Pierre Berton's History for Young Canadians series.Pierre Berton, perhaps Canada's best known writer, recounts the compelling stories of the battles of the War of 1812 in this third omnibus in the Pierre Berton's History for Young Canadians series. These fast-paced narratives, written for pre-teen and teenage readers, recreate the battles that would shape Canada's future. Originally printed as separate volumes in the Adventures in Canadian History series, the titles in the third book in the series, Pierre Berton's History for Young Canadians, The Battles of the War of 1812, include: The Capture of Detroit, The Death of Isaac Brock, Revenge of the Tribes, Canada Under Siege, The Battle of Lake Erie, The Death of Tecumseh, and Attack on Montreal. Berton focuses on the most important battles of the War of 1812, relating the stories in accurate, lively detail. Facts and figures, historical characters, and battle strategies blend seamlessly into an exciting lesson in Canadian history.This is the story of the war that helped Canadians develop a sense of pride and community, setting the groundwork for a united Canadian nation. Focusing on major historical characters, Berton describes figures such as Tecumseh, Isaac Brock, Charles-Michel d'Irumberry de Salaberry, and Laura Secord. Less familiar characters, from minor officers to Loyalist informers, add depth and drama to the history.

"When Pierre Berton describes a battle, you are right there. You've got to know the commanders; you've met some of the eager young soldiers; you care about what happens to them. Once the guns start firing, you are both exhilarated and fearful."
-- Charlotte Gray, from the foreword

"Written in a style that will be easily understood... the book is one that should stimulate a strong interest in Canadian history."
-- CM Magazine

"This book is ideal resource for teachers or for parents who want their children to take a better look at our nations history and to better appreciate the values we have and where those values come from. Written by perhaps the foremost authority on Canadian history, the pages will turn quickly but end with a new appreciation of a war that should not be forgotten and the battles and heroes that gave us our freedom."
-- The Leader Post (Regina)