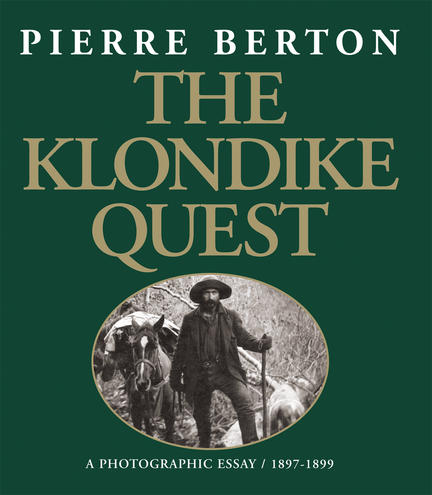 "It is interesting to watch how the expressions change as you progress through the book, from optimistic in the beginning, to almost hopeless by the end... The pictures alone will offer hours of viewing."
-- CM Magazine

"The story of the stampede is told well but shown even better."
-- HistoryNet.com

This classic book is a truly great photographic essay of an historic event that made millionaires of an anonymous few but crushed thousands more in a hostile climate and unforgiving terrain anticipated by none.

We are nearing the 125th anniversary of the Klondike Gold Rush and no one has told the story as vividly as Yukon-born Pierre Berton. Canada's leading popular historian compiled over 200 rare period images from the more than 10,000 images in public archives and private collections. Depicting every aspect of what Berton called "one of the strangest mass movements in history," many of the compelling images were first published in this book.

The Klondike Quest brings to life the panoramic drama of the great stampede for gold as seen by the ordinary gold-seeker. The photographs are beautifully reproduced and informatively and colorfully captioned. "One million people, it is said, laid plans to go to the Klondike. One hundred thousand actually set off. And so the Klondike saga is a chronicle of humanity in the mass... For the next eighteen months, the Yukon interior plateau became a human anthill."

As a true story of real men looking for a golden phantom, it's a tale that can't be beat.

As a true story of real men looking for a phantom, it's a tale that can't be beat. Boston Mills Press has included here more than 200 photographs, some of them breathtaking, some funny, some wistful some horrifying...and some downright sad.

The gold fever, the shimmering sands, the trail of dead horses, the golden stairs, the armada, the shuffling throng, the creeks, and the city of gold all come alive with brilliant clarity.... This is a truly great photographic essay.... It is a must for every Canadian library.

The story of the stampede is told well but shown even better.

While the photographs form the heart of the book, the text does not take second place.... Even in the relatively short amount of text allowed for, the author provides us with personal human details rather than simple sweeping generalities... The Klondike Quest should have a broad appeal to readers of all ages who like information provided about a brief but dramatic period in our history, or to those who simply enjoy the many photographs. The pictures alone will offer hours of viewing.

Awe inspiring... [Berton] manages to convey the lust for gold that followed the first news of a gold strike in the summer of 1897... Many of the photos, though, are unfamiliar, and some truly are worth the thousand words it would take to describe them.

It is interesting to watch how the expression change as you progress through the book, from optimistic in the beginning, to almost hopeless by the end... a broad appeal to readers... The pictures alone will offer hours of viewing.