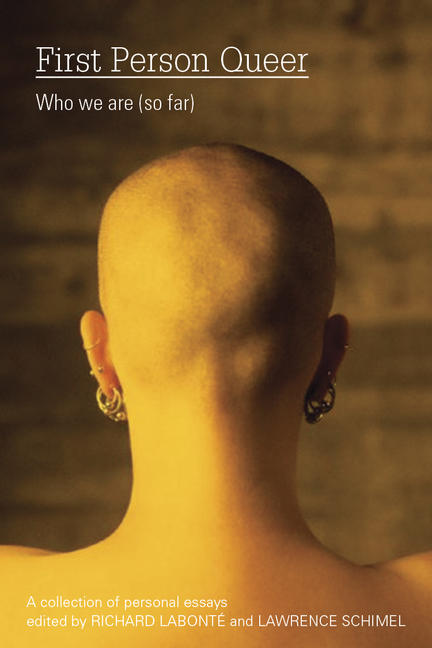 In this amazing, wide-ranging anthology of non-fiction essays, contributors write intimate and honest first-person accounts of queer (gay/lesbian/bisexual/trans) experience: from coming out to "passing" as straight, to the devastation of meth addiction, to growing old to living proud. These are the stories of contemporary queer life--and by definition, are funny, sad, hopeful, and truthful. Representing a diversity of genders, ages, races, and orientations, and edited by two acclaimed writers and anthologists (who between them have written or edited almost 100 books), First Person Queer depicts the diversity, the complexity, and the excitement of contemporary GLBTQ life.

Richard Labonte (1949-2022) was a writer, bookseller, and editor, best known as the editor or co-editor of numerous anthologies of LGBT literature. He was the co-founder of the LGBTQ bookstore A Different Light, and managed the store in Silver Lake, California for many years. As well, he was editor of Cleis Press' Best Gay Erotica series for many years; for Arsenal Pulp Press, he co-edited four anthologies with Lawrence Schimel: The Future Is Queer, First Person Queer, Second Person Queer, and I Like It Like That. He won three Lambda Literary Awards, for Best Gay Erotica 2005, First Person Queer, and Best Gay Erotica 2009.

Lawrence Schimel is an award-winning author and anthologist who has published over 70 books in many genres, including four anthologies for Arsenal Pulp Press, all co-edited with Richard Labonte: The Future Is Queer (2006), the Lambda Award-winning First Person Queer (2007), its sequel Second Person Queer (2009), and I Like It Like That (2009). His other books include Lambda winner PoMoSexuals: Challenging Assumptions about Gender and Sexuality (with Carol Queen), The Drag Queen of Elfland, The Mammoth Book of Gay Erotica, and Things Invisible to See: Lesbian and Gay Tales of Magic Realism. Formerly of New York, he has lived in Madrid, Spain since 1999.

Richard Labonte and Lawrence Schimel have gathered a remarkable number of personal narratives that document the incredible diversity of experiences, backgrounds, personal histories and yes, sexual orientations and gender identities, that all resonate with the word queer. The stories create a strong a vibrant community where multiple experiences can cohabit and flourish.... Recommended for both public and academic libraries.
-GLBT Roundtable Newsletter (American Library Association)

It's remarkable that every voice in this anthology is personable.... The eloquence of spirit in each essay draws readers into understanding different points of view.
-Outwords (Winnipeg, MB)

These short pieces show enormous range of difference.... First Person Queer is not a book to be read through, rather it is one to be dipped into and relished for what it echoes with the individual reader and what provides them with moments of insight.
-one80 (UK)

This collection is refreshing because of the diversity of experiences represented.... First Person Queer is humorous at times, painful at others, and extremely honest all the while. Though there is no singular, exclusionary 'queer experience,' these essays all complement each other to show the qualitative experiences as a member of a marginalized group.
-Feminist Review

The collection winningly celebrates differences rooted in a variety of ways to the mutable boundaries of sexuality and gender.... Whether read in a couple of sittings or savored essay by essay, this is an eye-opening vista on diversity.
-Kirkus Review

Other titles by Richard Labonte

Other titles by Lawrence Schimel