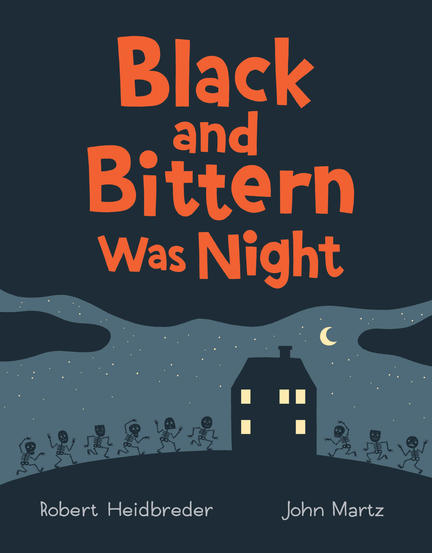 It's a band of animated skeletons versus daring children in this rhyming Halloween picture book tale, told in delightful nonsense language. Here the children are “tyke-tots” and the adults “tall-bigs,” while the skeletons are called “SKUL-A-MUG-MUGS.” As the story begins, the SKUL-A-MUG-MUGS descend on a small, quiet town on Halloween night.

The SKUL-A-MUG-MUGS have a plan to keep the children from trick-or-treating.

But the children decide to take matters into their own hands.

What ensues is a fun, spirited fight to the finish, as naturally the children outwit and out-frighten the old SKUL-A-MUG-MUGS so the trick-or-treating can commence once again! In this one-of-a-kind book, award-winning author and children's poet Robert Heidbreder has imagined an empowering story about a chaotic world where the adults are terrified and the children take over to save the day --- and the candy, of course. The silly and spooky madness is delightfully illustrated with irresistible artwork by award-winning John Martz. This is sure to be a hands-down favorite as a read-aloud --- for all ages --- during the Halloween season or anytime fun wordplay is called for. It makes a fabulous language arts introduction to rhyming poetry that will surely inspire children to create their own made-up words and stories. Separately, it can also work for social studies discussions about cultural celebrations such as Halloween that focus on images and tales of the dead.

Robert Heidbreder was born in Illinois but now lives in British Columbia. He has enchanted children with his joyful poems and rhymes for more than two decades. A former elementary school teacher (and winner of the Prime Minister's Award for Teaching Excellence), he believes that children's love of silly and absurd combinations of words makes them natural poets. His books include Eenie Meenie Manitoba, Don't Eat Spiders, I Wished for a Unicorn, Drumheller Dinosaur Dance, Python Play, See Saw Saskatchewan, Crocodiles Say, A Sea-Wishing Day, Lickety-Split, Crocodiles Play, Shake-Awakes, Noisy Poems for a Busy Day, Black and Bittern Was Night and Song for a Summer Night.

John Martz is a cartoonist and illustrator in Toronto, Ontario. His 2016 graphic novel for children, A Cat Named Tim and Other Stories, was shortlisted for the Governor General’s Literary Award and was nominated for the Eisner Award for Best Publication for Early Readers.

Other titles by Robert Heidbreder

A Wild Story of Musical Words

Crocs in a Box

Song for a Summer Night

Noisy Poems for a Busy Day

Other titles by John Martz

Evie and the Truth about Witches

A Cat Named Tim and Other Stories