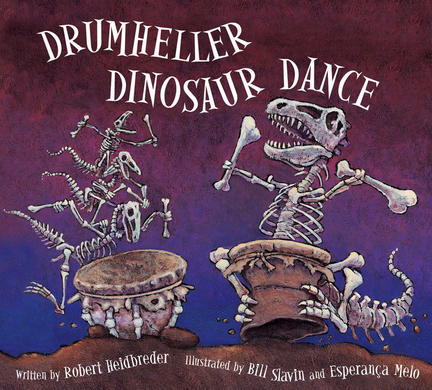 By daylight, the Drumheller dinosaurs rest their ancient bones. But when the moon rises, so do these slumbering skeletons --- ready to tango, fandango, shimmy and shake! This exuberant read-aloud imagines what the dinosaur skeletons of world-famous Drumheller, Alberta, get up to when everyone's asleep. Kids will want to thumpity-thump along with these dynamic dinos as they dance across the dark, dusty Badlands.

Robert Heidbreder was born in Illinois but now lives in British Columbia. He has enchanted children with his joyful poems and rhymes for more than two decades. A former elementary school teacher (and winner of the Prime Minister's Award for Teaching Excellence), he believes that children's love of silly and absurd combinations of words makes them natural poets. His books include Eenie Meenie Manitoba, Don't Eat Spiders, I Wished for a Unicorn, Drumheller Dinosaur Dance, Python Play, See Saw Saskatchewan, Crocodiles Say, A Sea-Wishing Day, Lickety-Split, Crocodiles Play, Shake-Awakes, Noisy Poems for a Busy Day, Black and Bittern Was Night and Song for a Summer Night.

Esperança Melo is a graduate of Sheridan College’s Animation Program and has completed an honors degree in graphic design from George Brown College. She has illustrated and designed several children’s books and loves working in various art forms and media, including sculpting in papiermâché. Esperança co-illustrated Drumheller Dinosaur Dance (Kids Can), which was awarded the 2005 Blue Spruce Award and the 2006 Chocolate Lily Award. Esperança was born in the Azores and now lives in Millbrook, Ontario.

Other titles by Robert Heidbreder

A Wild Story of Musical Words

Crocs in a Box

Song for a Summer Night

Black and Bittern Was Night

Noisy Poems for a Busy Day

Other titles by Esperança Melo

The Story of Canada's Maple Leaf

Mister Dash and the Cupcake Calamity

Notes from a Children's Librarian: Get Dancing

These picture books can’t teach you how to dance, but they can inspire you.