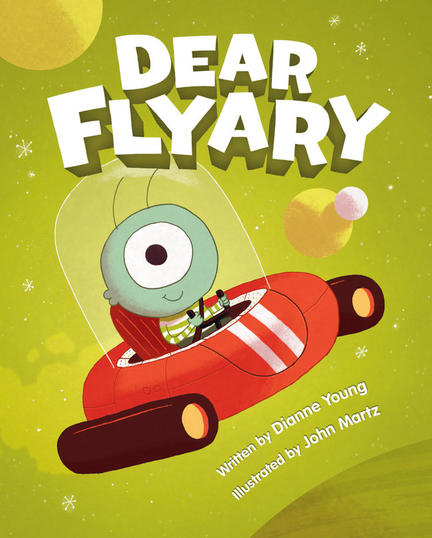 One-eyed alien Frazzle recounts his flying adventures in a new journal (in alien vernacular, of course). He bighearts his little Model 7, but as time passes, it starts making strange sounds, and Frazzle --- pressured by friends and co-workers --- wonders if he should trade it in. One day, when it goes CLUNK in the middle of the flyway, it's clear something must be done. Youngsters will love the out-of-this-world illustrations depicting worlds rife with all manner of alien life. Even more irresistible: an unexpected ending sure to delight careful readers.

John Martz is a cartoonist and illustrator in Toronto, Ontario. His 2016 graphic novel for children, A Cat Named Tim and Other Stories, was shortlisted for the Governor General’s Literary Award and was nominated for the Eisner Award for Best Publication for Early Readers.

There is much fun to be had sounding out words and guessing at their meaning and roots, as planet Harbat's jabberwocky attests.

For his “dropday,” space creature Frazzle receives a flyary (aka diary) “to scrib down everything about” his first spaceship, a “flixsome” Model 7 that he just “bighearts.” Over time, the ship makes a series of strange noises. And each time, Wurpitz, a mechanic, reassures him that the noises are only minor problems, not even worth fixing; in fact, she says Frazzle will get used to the noises, which he does. When the Model 7 makes one large CLUNK! and stops in the middle of the flyway, Wurpitz now has to build a new engine. But Frazzle thinks the sound from this engine is “non-giddious” and asks her to fix it. Why is she smiling at Frazzle’s request?

Rich in the use of language, Dear Flyary is embedded with words, expressions and references that wonderfully capture the details of Frazzle’s world in a way that does not blustrate the reader. This is a charming “bigheart” story, full of humour that people of all ages will find pretty laffy. The strength of Frazzle’s voice and the depth of his character are intimately revealed in Frazzle’s regular scribbings. There are also many opportunities for children to discuss points of comparison between Frazzle’s world and their own. Martz’s illustrations, rendered in Photoshop, are fun and engaging, viewtifully complementing the warmth and humour of the story.

Other titles by Dianne Young

Grampa, Will You Tell Me A Story?

Other titles by John Martz

Evie and the Truth about Witches

A Cat Named Tim and Other Stories

Black and Bittern Was Night