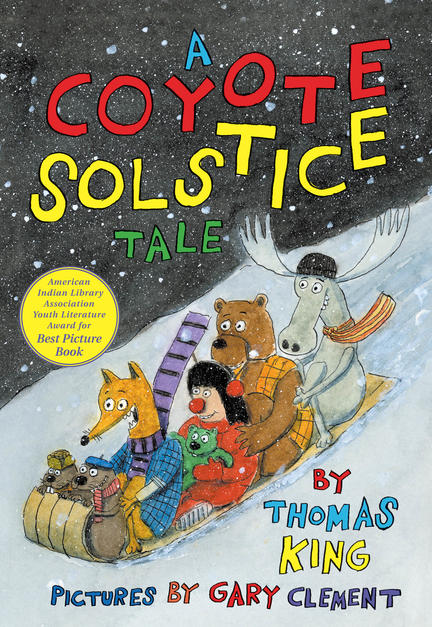 Trickster Coyote is having his friends over for a festive solstice get-together in the woods when a little girl comes by unexpectedly. She leads the party-goers through the snowy woods to a shopping mall -- a place they have never seen before.

Coyote gleefully shops with abandon, only to discover that fi lling your shopping cart with goodies is not quite the same thing as actually paying for them. The trickster is tricked and goes back to his cabin in the woods -- somewhat subdued -- though nothing can keep Coyote down for long.

The humor is dry and affectionate, the rhyming text delights with sly turns of phrase, the watercolor cartoons are whimsical … [A] holiday treat.

This critique of consumerism has the irreverent, biting humour of all King's Coyote stories.

This witty winter tale deftly skewers the materialistic aspect of the holiday season in a humorous, trenchant way.

[A] splendid satirical romp, with an equally splendid profusion of watercolour illustrations by the inimitable Gary Clement.

Coyote is expecting his friends to celebrate the winter holidays when he receives an unexpected guest: a small girl dressed like a reindeer. She has come searching for “friendship, goodwill and peace”. Concerned she is lost, they follow her tracks back, which leads them to a clear cutting and “A bright object in the night”, which turns out to be the mall. Coyote shops for big ticket items for all his friends, discovering the concepts of cash, credit and consumerism. This story is a humorous look at how commercialism contrasts with the age old traditions of feasting, sharing and caring.

King is a Governor General’s Award nominated novelist/politician of Cherokee, Greek and German descent. He currently teaches English and Aboriginal literature at the University of Guelph. In 2004, he was made a Member of the Order of Canada.

Coyote and friends are celebrating the winter solstice when a little girl shows up. She leads them out of the woods to the new shopping mall, which is filled with the madness of Christmas shopping. The animals fill their cart, but, when it comes time to leave, paying is not the same as foraging.