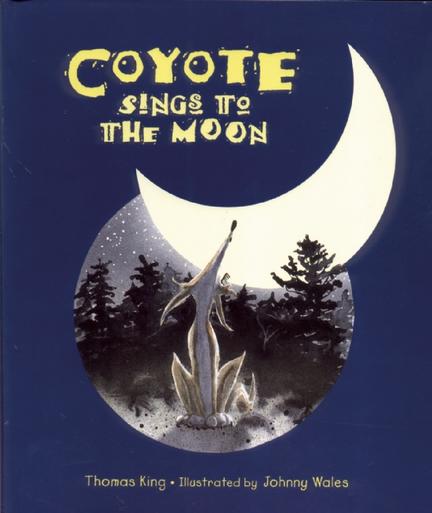 Who needs the moon, anyway?
Every evening, Old Woman and the animals gather at the pond to serenade the moon. When Coyote overhears them, he decides that what they really need is a good tenor. Unfortunately, the other animals disagree. Coyote has an atrocious voice, and they worry that his singing will scare the poor moon away!
"Hummph," says Coyote, whose feelings are hurt. Why would anyone want to sing to the moon, anyway? In fact, he wonders, who needs the moon at all? All she does is make the sky so bright it's almost impossible to get a good night's sleep.
But Moon is listening, and she decides it's time to teach Coyote a lesson. She packs her bags, slides out of the sky and dives into the pond, leaving the animals in utter darkness. When all their efforts fail to entice the Moon to return, Old Woman and the animals concoct one final, desperate scheme to get her back into the sky.
Thomas King triumphs again, using the traditional coyote in this brilliant and original tale. Johnny Wales's wry and beautiful illustrations are a perfect complement to King's humourous cautionary tale for children.

Johnny wales has illustrated several books for children, including Gruntle Piggle Takes Off by Jean Little, Noguchi the Samuri, by Burt Konzak, and The Toronto Story, by claire Mackay. A native Torontonian, Wales and his wife currently live in Japan.

Coyote Sings to the Moon

In this funny, humorously illustrated retelling of a First Nations coyote tale, we find out why it is that coyotes howl at the moon. Every night, Old Woman sings a song for the moon. The animals in the forest hear her one night, and all join in. Unfortunately, Coyote, who has the worst singing voice ever, decides that he should join in and scares the moon right out of the sky. Now they have to solve of the problem of how to get the moon back into the sky. Will Coyote’s usual bumbling help or hinder the quest to find a way to restore the moon?

Governor General’s Award nominee Thomas King’s other works include Coyote’s New Suit, A Coyote Columbus Story, and One Good Story, That One. He is also the creator of CBC’s Dead Dog Cafe Comedy Hour.

Other titles by Johnny Wales

A conversation about holey socks, wallpaper patterns, big suns, and all the exciting things happening in First Nations children's literature in Canada …