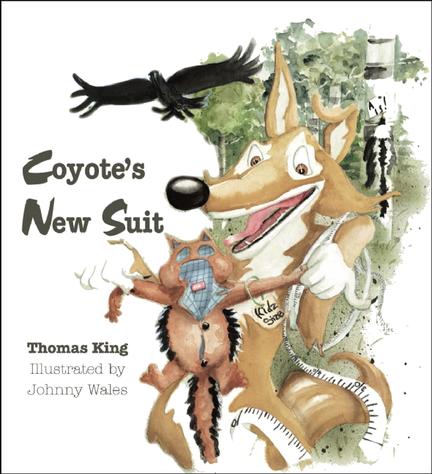 Coyote&rsquo;s back, and he&rsquo;s stirring up trouble again?or is he?
Coyote loves his soft, toasty-brown suit?at least until Raven hints that it might not be the finest in the forest. Suddenly, Coyote is noticing suits wherever he looks: Bear&rsquo;s is certainly impressive, Porcupine&rsquo;s is sporty, Raccoon&rsquo;s is positively chic, and Skunk&rsquo;s is perfect for formal occasions. No one would mind if he borrowed them for awhile, would they?
Soon, the forest is in an uproar. With their suits missing and nothing to wear, the animals don&rsquo;t know what to do?until Raven makes an unusual suggestion. When the situation threatens to get completely out of hand, only Raven can set things right.
Fans of Thomas King&rsquo;s Coyote Sings to the Moon will delight in this rollicking new tale of Coyote&rsquo;s adventures in the animal world. Inspired by the rich folklore of Native cultures, Coyote&rsquo;s New Suit offers a wise, witty and entertaining look at the consequences of wanting more than you need.

Johnny wales has illustrated several books for children, including Gruntle Piggle Takes Off by Jean Little, Noguchi the Samuri, by Burt Konzak, and The Toronto Story, by claire Mackay. A native Torontonian, Wales and his wife currently live in Japan.

Other titles by Johnny Wales

Coyote Sings to the Moon

Notes from a Children's Librarian: Text to Text

Great kids books in conversation with each other.

Notes From a Children's Librarian: Books About Disguises

October is the superb month for books about disguise, because of Halloween, of course, and because of how the whole outdoors is dressing up in glorious …