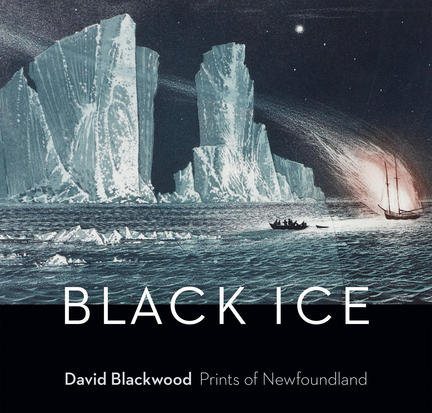 David Blackwood was born in 1941 in the outport community of Wesleyville, to a family with a long seafaring history. Recognized as an artistic prodigy, he was awarded a Government of Newfoundland Centennial scholarship to study at the Ontario College of Art, in Toronto. By the age of twenty-three, one of his etchings had been purchased by the National Gallery of Canada.

Blackwood has been telling stories about Newfoundland in the form of epic visual narratives for 30 years. To bring this narrative to life, the book situates Blackwood's prints in time and space by looking at the history of Newfoundland and the people who settled there. Blackwood explores the timeless theme of the struggle for survival between humans and nature in one of the most exposed and hostile environments on Earth. He depicts a town and a centuries-old way of life that has disappeared. His dramas encapsulate class, gender, and intergenerational issues that can only be understood in the context of the formation of the landscape, its natural resources, immigration and settlement, religious and political debate, economic and social conditions, and the environmental threat to the survival of traditional lifestyles.

Blackwood has created an iconography of Newfoundland which is as universal as it is personal, as mythic as it is rooted in reality, and as timeless as it is linked to specific events. This book draws on childhood memories, dreams, superstitions, legends, the oral tradition, and the political realities of the Wesleyville community on Bonavista Bay where Blackwood was born and raised.

Black Ice — a comprehensive and sumptuously illustrated retrospective — features over 70 prints spanning 40 years of the artist's work and features essays by Blackwood, Michael Crummey, Sean Cadigan, and the Art Gallery of Ontario's Dr. Katharine Lochnan. It also features essays by scholars based in Canada and Ireland, including an essay on the environment by Dr. Martin Feely, Head of Earth Sciences at the National University of Ireland in Galway (in collaboration with Dr. Derek Wilton, Department of Earth Sciences, Memorial University) and an article on mumming by Caoimhe Ni Shuilleabhain.

Dr. Katharine Lochnan is the Art Gallery of Ontario's Deputy Director of Research and R. Fraser Elliott Curator of Prints and Drawings. She has edited or written several previous books, including David Milne Watercolours and Turner, Whistler, Monet.

Michael Crummey is the author of four books of poetry, and a book of short stories, Flesh and Blood. His first novel, River Thieves, was a finalist for the Scotiabank Giller Prize, his second, The Wreckage, was a national bestseller and a finalist for the Rogers Writers’ Trust Fiction Prize. His most recent novel, the bestselling Galore, won the Commonwealth Writers’ Prize for Best Book. Under the Keel is his first collection in a decade. He lives in St. John’s, Newfoundland.

Sean T. Cadigan is Head of the Department of History at Memorial University of Newfoundland.

Martin Feely is Senior Lecturer in Earth and Ocean Sciences at the School of Natural History, National University of Ireland, Galway.

Derek H.C. Wilton is a professor in the Department of Earth Sciences at Memorial University of Newfoundland.

Caoimhe ní Shúilleabháin is a translator in the Irish Unit of the Directorate General of Translation at the European Commission.

"This eloquent piece sheds valuable light on those veiled, ghostly figures that haunt so many of Blackwood’s most mysterious works."

Other titles by Katharine Lochnan

Selected Works on Paper from the Renaissance to Modernism

Painting toward the Light

Other titles by Michael Crummey

Most of What Follows is True

Under the Keel special hardcover edition