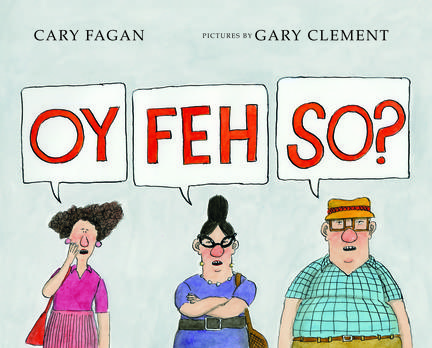 In this hilariously written and illustrated story, three children turn their family's weekly Sunday visit from Aunt Essy, Aunt Chanah and Uncle Sam on its head. And in the end, they all have a ball.

Every Sunday Aunt Essy, Aunt Chanah and Uncle Sam drive up in the old Lincoln for the afternoon. They plop themselves down in the living room, and no matter what anyone says their response is always the same — "Oy," "Feh," "So?"

One afternoon the three children try to provoke a different reaction. They fake a robbery, produce a terrifying child-eating dragon and pretend to be kidnapped by space invaders, but their aunts and uncle remain unimpressed. In exasperation the children take to mocking them, with red wool for hair like Aunt Essy's, a big pillow for a belly like Uncle Sam's and a pair of toy glasses like Aunt Chanah's…and soon they are all laughing so hard they're practically crying.

Cary Fagan's characteristically dry humor and Gary Clement's wonderfully witty illustrations perfectly depict a family with loveable quirks in this story that is sure to become a favorite.

... [an] amusing scenario ... [today's kids] will appreciate the overall sentiment.