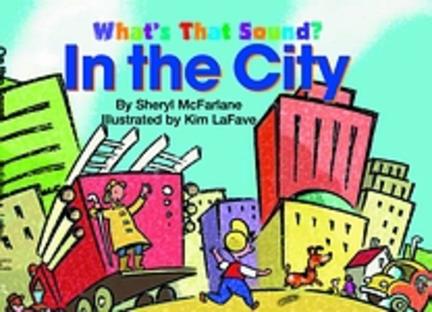 Wherever you live, in the middle of a big city or on a farm, toddlers revel in the unique cacophony of noisy delights that surround them every day. In the city, garbage trucks CLATTER and CLANG, car horns go BEEP, BEEP, and sirens WAIL. On the farm, tractors RUMBLE, QUAKING ducks SPLISH SPLASH, and Pigs SNORT, SNORT, SQUEAL.
Even if you live far away from farms or cities, it won't be long before any toddler understands the sounds and finds the corresponding objects before it's time to turn the page. And finally, a quiet kiss or hug awaits them at the end of each book-the best little sounds of all.
These bright, colorful board books serve a dual purpose for inquisitive little ones. Not only do they link noises to objects but they encourage the association of meaning to letters on a page-the first, crucial step in developing young readers.
Author Sheryl McFarlane's rhythmic read-aloud text is perfectly complimented by Kim LaFave's bright and colorful scenes. A glorious pair of books for little noisemakers everywhere.

"Kim LaFave's illustrations, on the farm and in the city, flow from double-page spread to double-page spread, all the colour of birds, tractors, fire engines and garbage trucks, humans and animals contained within fluid black brushstrokes. Rhyming couplets keep things moving along at a good clip..."
— The Globe and Mail

"...explores the many sounds you'd hear on a farm: roosters crowing, tractors rumbling, pigs snorting, dinner bells clanging. Each book ends with a reassuring hug or kiss - that barely makes a sound at all."
— Today's Parent

"Toddlers hardly need to be encouraged to make sounds! But do it anyway, with What's that Sound? board books. Ok, sounds aren't the stuff kids are supposed to know by kindergarten, but these are lots of fun!"
— Hi-Rise Newspaper

Other titles by Kim LaFave