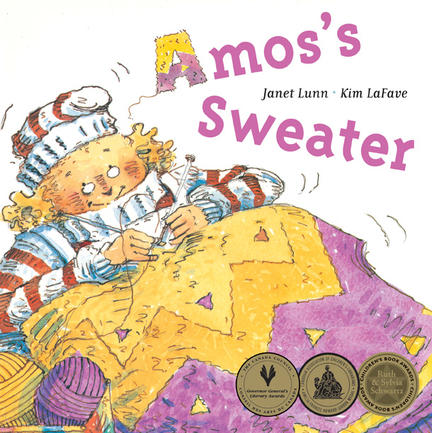 Winner of the Governor General's Award for Illustration, the Amelia Frances Howard-Gibbon Illustrator's Award and the Ruth Schwartz Award

Amos the sheep is old and cold and tired of giving up all his wool. But despite his noisy objections, Aunt Hattie shears Amos once again and knits his wool into a brightly colored sweater for Uncle Henry.

Poor Amos decides that this time he has had enough — and he sets out to reclaim what is rightfully his.

JANET LUNN’s children’s books always make award and bestseller lists. She hase been awarded the Writers’ Trust Matt Cohen Award in Celebration of a Writing Life and the Order of Ontario, and she is also a member of the Order of Canada. Lunn’s history of Canada, The Story of Canada, is a must-have reference book for teachers and parents across the country

ALAN DANIEL is a fine artist who has also illustrated a number of children’s picture books for over 20 years. His interior illustrations for children’s books include Aaron’s Hair, Good Families Don’t, as well as non-fiction books such as The Story of Canada and Canadian Pioneers.

Other titles by Janet Lunn

Other titles by Kim LaFave

Notes From a Children's Librarian: On Perseverance

Books that show the development of perseverance as a character trait.