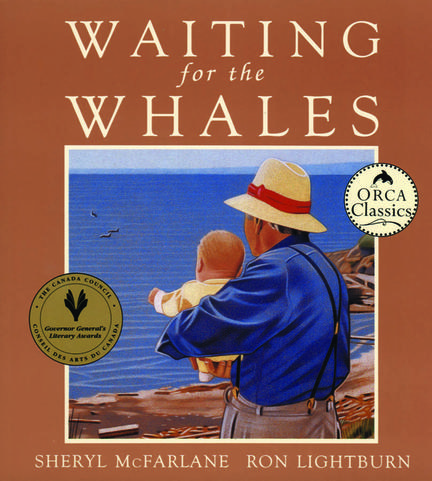 In this timeless story set on the West Coast, an old man lives alone on a bluff overlooking the sea and tends his garden. And waits. Only when the whales return each year to the bay in front of his cottage is his loneliness eased. One day, his daughter and her baby return home to live with the old man, bringing a renewed sense of purpose to his life. As his granddaughter grows, the old man passes on a wealth or knowledge and wisdom as well as his passion for the whales. And each year they wait together for the whales to appear. A gentle story that illuminates the unique friendship between grandparent and child, Waiting for the Whales also suggests that aging and death are only part of a greater cycle of rebirth and continuity.

Ron Lightburn's career as a children's book illustrator was launched with his Governor General's Award-winning artwork for Waiting for the Whales in 1991. Since then he has illustrated numerous other bestselling picture books and has become internationally renowned for his sensitive storytelling skills and range of illustration styles. For more information, visit www.thelightburns.com and follow him on Twitter @ronlightburn.

"The gentle, distancing tone is reflected in softly detailed color-pencil art, with careful compositions and dramatic shadows...Poetic and comforting."

"Waiting for the Whales, a multi-award winning (for both author and illustrator) picture book, was described as 'timeless' when originally published in 1991. Twenty-five years later, it lives up to that praise, remaining very much a story for today. The premise, setting, themes and illustrative style still inspire in this classic story written from the heart…Be sure to add this gentle but captivating story to your picture book collection. Waiting for the Whales will remain a favorite to reread for generations to come."

Other titles by Ron Lightburn

Rick Hansen Wheels Around the World

Juba This, Juba That

A Poppy Is to Remember