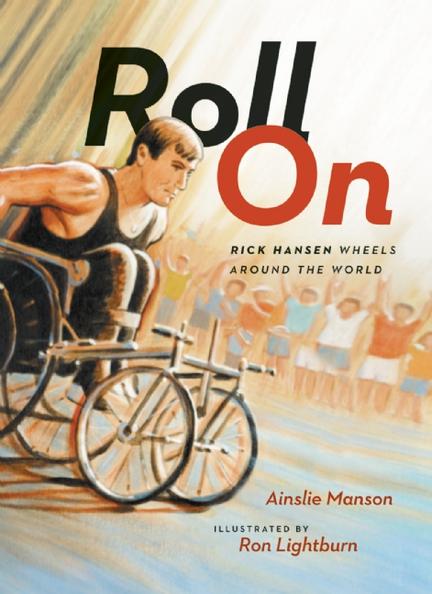 The remarkable story of Rick Hansen's Man in Motion World Tour -- and all the big dreams it inspired.

As Rick Hansen wheels around the globe on his incredible Man in Motion World Tour, the children he meets are encouraged to dream their own dreams and work to make them come true. In China, after meeting Rick, Lin, who longs to be a ballerina, pictures herself leaping gracefully over a wall as high as the Great Wall of China. Back in Canada, Jack makes great progress in his wheelchair -- even learning to do a wheelie -- as he eagerly awaits his hero's return.

On the eve of its twenty-fifth anniversary, Rick Hansen's compelling journey is retold for young readers and brought to life in this beautifully illustrated book. It is a story of triumph, adventure, and enormous personal challenge. Readers travel with Rick, glimpsing not just the joys but all the ups and downs and the aches and pains that he endured on the 43,000-kilometre journey.

Readers also discover little-known facts of the great journey. They learn that Rick wheeled the equivalent of three marathons a day and went through ninety-four pairs of gloves. And they learn about the gift of a song that Rick and his team sang or hummed kilometre after kilometre. The lively text and enchanting illustrations combine to bring to life Rick's amazing feat and the impact it has had on children everywhere.

Ainslie Manson is the author of several inventive historical books for young people, including Just Like New (the tale of a young girl who sends her favorite doll to an English child during World War II) and Baboo (the story of the daughter of Canada's first prime minister, who lived life to the fullest despite her severe disabilities). Ainslie Manson lives in Vancouver.

Ron Lightburn's career as a children's book illustrator was launched with his Governor General's Award-winning artwork for Waiting for the Whales in 1991. Since then he has illustrated numerous other bestselling picture books and has become internationally renowned for his sensitive storytelling skills and range of illustration styles. For more information, visit www.thelightburns.com and follow him on Twitter @ronlightburn.

Other titles by Ainslie Manson

From Canada by Land

A Dog Came, Too

Other titles by Ron Lightburn

Juba This, Juba That

A Poppy Is to Remember