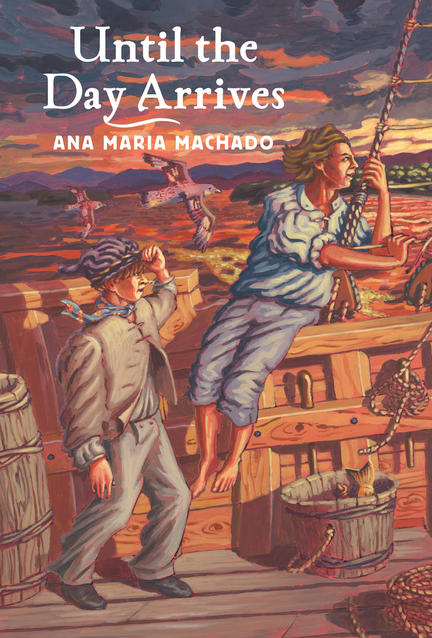 A fast-moving middle-grade novel set in the seventeenth century about two Portuguese orphans who are sent to Brazil where they encounter slaves from Africa. Together with their new friend, an aboriginal boy, they work towards reuniting the slaves with their families and helping them escape to freedom.

The novel opens when Bento is wrongly thrown into Lisbon’s prison by the king’s guards, leaving his younger sibling, Manu, to fend for himself. Fortunately, a nobleman’s family helps to reunite the siblings — although they will have to lead a life of exile in Brazil. They keep secret the fact that Manu is a girl in disguise so that she will be able to accompany her brother aboard ship.

The story shifts to the African savannah, where a young boy, Odjigi, is hunting gazelle with his father and other men. But the hunters soon become the hunted — they are kidnapped by slave traders, as are the women and children of the village, marched to the sea, shut up in dark, airless huts to prepare for the voyage across the Atlantic, and then undergo the horrifying trip itself.

In Brazil, the siblings quickly adapt to their new lives, but they are shocked by the existence and treatment of African slaves. Manu befriends an aboriginal boy, Caiubi, and a slave, Didi, who has been separated from his father. Meanwhile Bento falls in love with Rosa, a beautiful young slave who is also searching for her family. When Manu learns from Caiubi that escaped slaves have formed quilombos — villages hidden deep in the forest where they live in freedom — she is determined that they must help Didi and Rosa escape.

The fast-moving adventure and authentic glimpse of Brazil’s early settlers will recommend this to young readers as well as to admirers of prolific Andersen Medal winner Machado.

Offers vivid descriptions, an intriguing plot and a setting not often seen in North American literature for children.

Readers will admire the patience of and preparation taken by the siblings to ensure that their strategies succeed. A gripping adventure.

Me in the Middle