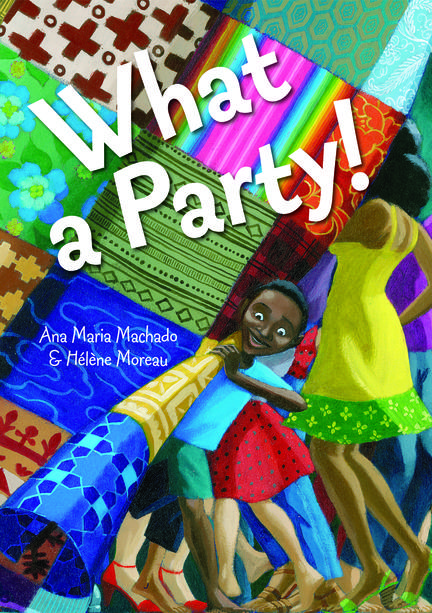 If it is just a few days until your birthday, and your mother says you can invite anyone you like to come over to play, be careful! If you don't watch out, you might soon be having the craziest party ever, with people and food from around the world. Before you know it, night could come and go and a new day could begin, and the dancing might still be going strong. At least, that is what happens in this humorous and irresistibly joyful cautionary tale!

In a celebration of neighbors and diversity, an open-ended party invitation results in a raucous gathering of children, pets and parents (plus salsa dancers and a reggae band!), all feasting on food from all over the world. Couscous, crepes, salad, ackee--there isn't enough room on the table for all the food. And it's noisy too, because people don't stop talking while they eat and dance. The party might have gotten out of hand a bit, but nobody minds--after all, it is the craziest, wildest, funnest party ever!

Everyone loves a party, and with its vivid illustrations and irresistibly playful text, this picture book delivers the rowdiest, happiest birthday party ever.

After studying graphic design and working as a designer, Hélène Moreau turned to children's book illustration. She has illustrated many picture books, including, also with Ana Maria Machado, Reve noir d'un lapin blanc. She lives in Paris.

...[the] warm, glowing acrylic-and-pastel paintings, depict the backyard jamboree from a below-eye-level perspective, allowing readers to feel like they are there. Warning: they may not want to leave this delightfully diverse celebration.

An effervescent celebration of the best possibilities of urban multiculturalism. Readers will want to move right in.

Machado, a prolific Brazilian writer for young children and the winner of the prestigious Hans Christian Andersen Award, offers an inspired vision of what the "craziest, wildest, funnest party ever" ought to be.

... a big-hearted vision of community, generosity, and the benefits of a little chaos—as well as a birthday party that any kid would be lucky to have.

Author Machado, who won the 2000 Hans Christian Andersen Award – the world’s highest international recognition for kiddie book writers and illustrators – knows how to party, bringing together all the different friends, families, cuisines from around the world into one multi-culti celebration.

…a celebration of diversity and of the sense of community. Augmented by Hélène Moreau’s illustrations, it is an attractive book that fits neatly within Canada’s proudly multicultural identity.

This book works well in multicultural activities and Social Studies lessons. Older students can research the cultures and foods. Recipes for the exotic dishes could be used in math and science activities.

Me in the Middle

Other titles by Elisa Amado

My Uncle Is Coming Tomorrow

A Small History of a Disagreement

When My Dad Went to the Jungle