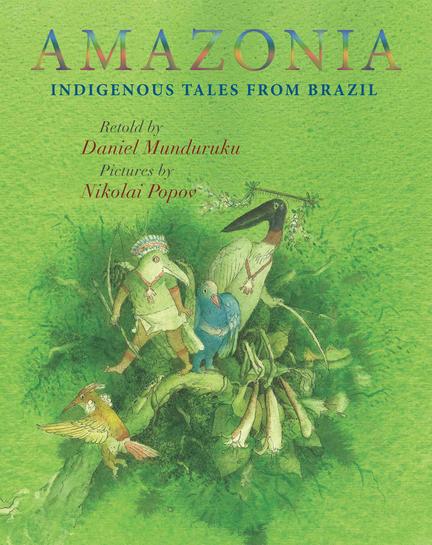 Amazonia is an extraordinary book of Brazilian folktales that combines the authentic voice of Daniel Munduruku, a noted indigenous author who grew up in the Amazon rainforest, with the imagined Amazon of Nikolai Popov, one of Russia's major artists and its foremost children's book illustrator.

Many years ago, Nikolai Popov, Russia's leading children's book illustrator, illustrated an extensive, academic collection of Brazilian folktales. The sources for his illustrations were the stories themselves and his own richly imagined Amazonia. Today the book is out of print and only a few copies survive -- a fate shared by many great books from the golden age of Russian children's books.

Groundwood in collaboration with a Brazilian publisher, Edicões SM Brasil, commissioned Daniel Munduruku, a noted indigenous Brazilian author, to select those stories he felt were most representative of the peoples of the Amazon and to retell them in his own voice.

Mermaids, jaguars, snakes, flying men, witches -- extraordinary creatures from the world's most important wild jungle live on in these tales. The stories are fascinating, and sometimes startling, as protagonists are killed off or transformed into animals or rise up precipitously into the heavens. But they offer a panorama of experience -- conflict and death, love and seduction, greed and gluttony, hunting and fishing, cooking and caring for plants -- and describe the origins of the natural world.

Munduruku's storytelling and Popov's imagination bring us the tales of the people of the Amazon in all their magic wonder.

An introduction describes the importance of myths, how the stories have survived and their relevance today. A glossary provides more information about animals and plants that may be unfamiliar to North American readers.

Daniel Munduruku was born in Belém, in the state of Para, Brazil. He has a doctorate in education from the University of São Paulo. A writer and teacher, he has won many awards for his children’s books, including the Jabuti Prize. He has been elected to the Lorena Academy of Letters and has been made a Commander of the Order of Cultural Merit by the president of the Brazilian Republic. Munduruku has also worked with street kids and has taught in a rural school for indigenous youth. His book Tales of the Amazon: How the Munduruku Indians Live is an exceptional account of what it is to be an indigenous person and provides a fascinating portrait of life in the Amazon. He lives in Lorena, in the state of São Paulo, Brazil.

Nikolai Popov was born in Saratov, in Central Russia. He is a gifted artist and is also widely regarded as one of the best children's book illustrators in Russia. He has exhibited his art in Moscow, Prague, Bratislava, Tokyo, Rome and Venice, among other cities. He has won many prestigious awards, including two gold medals at the International Exhibition of Book Art (Leipzig), the Grand Prix and Gold Medal at the International Biennial of Illustration (Bratislava), the Silver Medal at the Painter's Academy (USSR), and he has been named an Honored Artist of Russia. He lives in Moscow.

The subject matter, representing eight different Amazonian peoples, is important . . . An excellent glossary, defining and describing the flora and fauna mentioned in the stories, is included.

These are tales that are real and breathe life into several cultures in this far and distant land.

Other titles by Daniel Munduruku

Tales of the Amazon

How the Munduruku Indians Live