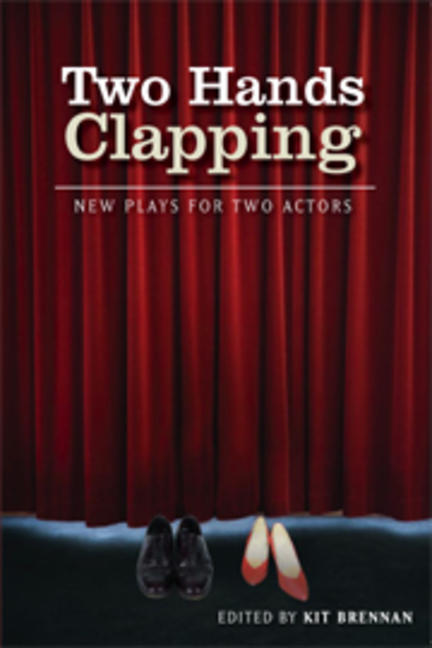 Two Hands Clapping is a goldmine for actors seeking two-person plays. This volume features full-length, one act, and short scripts for two actors. The playwrights are Canadian and are working from coast to coast and most regions in between. Established writers appear in this collection, as well as voices that are just beginning to make their mark in Canadian theatre.

The plays in Two Hands Clapping have appeared on the main stage, in alternative theatres or non-traditional theatre spaces, at the fringe, and/or in professional workshops. Some of the plays have toured nationally and internationally.

This volume also includes in-depth interviews with playwrights, focusing on the challenges and satisfactions of writing a play for two actors. Two Hands Clapping is a valuable source book for theatre students and teachers seeking new plays of varying lengths for production in festivals or other performance opportunities. It is also an excellent place to find two-actor scene work and — of course — to discover new voices, as well as new work by some of your favourite Canadian playwrights.

Nathan Cuckow is an award-winning actor, producer, playwright and a co-artistic director of Edmonton’s critically acclaimed theatre company Kill Your Television. Born and raised in Calgary, Cuckow moved to New York City at the age of nineteen and studied at the American Musical and Dramatic Academy. Upon graduating, he worked as an administrator in the Education Outreach program for Tony Randall’s National Actors Theatre for the Broadway production of The Sunshine Boys. Cuckow returned to Canada in 1998 and has since then called Edmonton home. In 2007 he received, with Chris Craddock, the GLAAD Media Award for Outstanding New York Theater (BASH’d).

Kelley Jo Burke is an award-winning Regina playwright, creative nonfiction writer and documentarian, a professor of theatre and creative-writing, and was for many years host of CBC Radio's SoundXchange. The 2017 winner (with composer Jeffery Straker) of Playwright Guild of Canada's national Best New Musical Award for Us, which premiered at the Globe Theatre 2018, and a new musical "The Curst" will premiere at Dancing Sky Theatre, May, 2020. Recent plays include "The Lucky Ones (Dancing Sky Theatre)," The Selkie Wife (Scirocco) and Ducks on the Moon (Hagios). Her published work includes four books, inclusion in four more collections, many periodicals, and her broadcasts include eight creative nonfiction documentaries for CBC's IDEAS. She was the 2009 winner of the Sask. Lieutenant-Governor's Award for Leadership in the Arts, the 2008 Saskatoon and Area Theatre Award for Playwriting, and has received the City of Regina Writing Award three times.

This collection came about out of curiosity and necessity. Curiosity: what's new across the country, how are others tackling the challenges and thrills of the form? Necessity: I teach a course at Concordia University called The Two-Hander, which (as you may suspect) is about writing a play for two actors. Many of the students who take this course have never written a play before, although the majority of them are studying theatre. They come to the course interested in finding out what it is like to create characters, tell a good story, and have their words come to life through the bodies of actors. They discover that first heart-stopping moment when their interior ideas become externalized and revealed through words, actions and events that they've sweated over and committed to paper, and on into the visceral immediacy of an audience's reaction to those very personal, and now public, ideas. That terrifying, exciting experience is a rich eye-opener for anyone who wants to make theatre, in any capacity, a part of their life.

For this book, I wanted a cross-country representation of previously unpublished scripts which included up and coming as well as established writers. A balanced mix of men and women — this in role distribution as much as in the writers themselves. I wanted full-length plays, and plays that are suited for festival or fringe time frames (thirty minutes to an hour). For teaching purposes, I needed a volume that was modestly priced with a healthy selection of scripts of varied styles, themes, and structures. Comedies as well as dramas. Social satire, fantasy, myth, storytelling. Different models of development and of production. Writers employing various angles or techniques: continuous action, intercutting of time and/or characters, actors portraying more than one character, historical events or persons as starting point or inspiration, clown, movement and dance.

Following each script, the writers talk about the work. I opened this up with a series of common questions, followed by a few more specific to the particulars of each play. They write about the initial spark of their idea, about particular structural choices such as how time works, how offstage characters function, if there's a time-lock or driving circumstance propelling the action, when and if it bends naturalism. Some of the writers are also actors, and they talk about writing work for themselves to perform. Two of the plays have been co-written — which is an interesting sidebar in itself, in a book of two-handers — so these writers discuss the process of writing with another person.

The obvious benefit of a play for two actors is that everyone is looking for a good one. They're rare gems, and highly producible. They're satisfying for audiences because you still retain the rich back and forth, the electricity, between actors. And they can be a wonderful journey for the actors because of the density of character arcs, the intensity of the experience.

Summer of My Amazing Luck

Other titles by Nathan Cuckow

Other titles by Kelley Jo Burke

Other titles by Sherry White

Devil You Don't Know, The