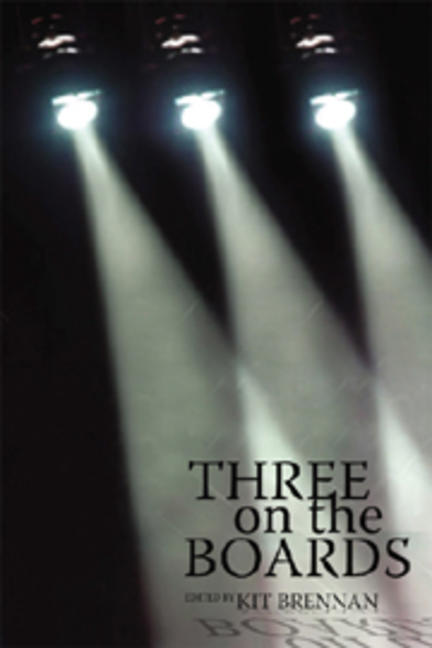 Included are: Curtsy by Brian Drader, In the Yichud Room by Joel Fishbane, Suicide Notes by Kenneth T. Williams, Canada House by J. Karol Korczynski, Starter Home by Katherine Koller, Three Dogs Barking by Frank Barry, and Purity Test by Scott Sharplin. In plays for three actors, everyone is fighting their own battle in a sharp-cornered ring, which flings them together and then apart. These seven plays from writers across the country paint a dark and mainly urban picture of Canada in the first decade of this new millennium. Love is variously celebrated and thrown away; as is tolerance, as is hope. Many of the characters are running as hard as they can away from themselves. At the same time, they are endearing, caustic, funny, and very human.

Brian Drader is an actor and writer from Winnipeg, who now lives in Montreal, and is head of the playwriting program at the National Theatre School of Canada. His writing credits include Liar (Scirocco Drama, 2004, a finalist for the Joyce Dutka Arts Foundation Playwriting Award, New York, NY), Prok (Scirocco Drama, 2003, winner of the Lambda Literary Award for Drama, a finalist for the 2003 Governor General’s Award for Drama, and winner of the Theatre BC National Playwriting Award and the Brick Playhouse New Play Award), The Norbals (winner of the Herman Voaden National Playwriting Competition, and also published by Scirocco Drama), S*it (a play for teens), The Fruit Machine, and Tucktuck. Drader is also editor of Breakout, a Scirocco anthology of plays by young emerging playwrights.

Kenneth T. Williams is a Cree playwright, filmmaker and journalist from the George Gordon First Nation. His plays CafŽ Daughter, Thunderstick (Scirocco 2010), Bannock Republic (Scirocco 2011), Suicide Notes and Three Little Birds have been professionally produced across Canada. Gordon Winter had its world premiere in Saskatoon in 2010 as the opening play for Persephone TheatreÕs Deep End series. It then went on to further acclaim in May, 2012 when it was presented again at OttawaÕs Arts Court Theatre as part of the National Arts CentreÕs Prairie Scene festival. Thunderstick has recently been optioned as feature film project. In 2011, Gordon Winter was nominated for a Saskatoon and Area Theatre Award for outstanding playwriting and CafŽ Daughter won Bob Couchman Theatre Awards for outstanding production, direction and female performance in Whitehorse. HeÕs working on a new play, Deserters, which was presented at the 2011 Weesageechak Begins to Dance festival. He blogs about his playwriting adventures on his website feralplaywright.ca. He also teaches playwriting at the University of Saskatchewan. As well as writing plays, Kenneth has edited three series for television. He is the first Aboriginal writer to earn an M.F.A. in playwriting from the University of Alberta. He resides in Saskatoon.

Katherine Koller teaches in the department of English and film studies at the University of Alberta and continues to write for radio, stage and screen. Her one-act comedies have been produced across Canada. Her website is www.katherinekoller.ca.

Frank was born in St. John's in 1954 and spent his childhood growing up on Shea Heights. He left home at seventeen and traveled to Vancouver then moved on to Toronto. Finally Frank got a job doing square dances with the traditional folk-rock group Figgy Duff. The group toured all over the island. In 1979 he co-founded Sheila's Brush Theatre Co. and has worked in the theatre as a writer, actor, dancer and director ever since.

Three people or objects placed at equidistance form a triangle, which is a sharp-cornered, spiky sort of a shape. They don't roll well, they're not curvy. They give off pointed vibes. So, I discovered, do recent Canadian plays for three actors—at least, the ones that I was drawn to for this collection.

Seven plays of various lengths, by writers living in Edmonton, Saskatoon, Toronto, Montreal and St. John's, form a darkly and mainly urban picture of Canada in the first decade of this new century and millennium. Some of their themes are not for the faint of heart. Love is variously celebrated and thrown away—as is tolerance, as is hope. There's a lot of substance abuse, as well as other kinds of abuse; many of the characters are running as hard as they can away from themselves. At the same time, they can be endearing, caustic and often extremely funny, because they are very human. Three of the plays have a writer (poet, novelist, screenwriter, journalist) as a character, and—especially when considered together—these dramas question what it's like trying to live, stay sane and document the world we've inherited (and created) at this poised, imminent heartbeat in time. Even the two gentler, shorter comedies have dark edges: a young woman mourned by a grieving father, an affection-starved, spooky landlady. In plays for three actors, it seems everyone is fighting their own battle in a sharp-cornered ring, which flings them together and then apart. Oddly, taken as a whole, they become almost uplifting.

The playwrights range from established voices, whose work you may have encountered before, to emerging writers of various ages. Their backgrounds, too, are widely differing and contribute to the ways in which they tell their characters' stories. For each, three actors are required to work in a vibrant ensemble, with all corners fully inhabited.

With these seven plays, I hope the anthology also demonstrates the ever-evolving nature of new writig for the theatre, which is acutely aware of the speed with which we now process image, sound, and even time and space. Scenes and characters morph seamlessly, borrowing from new techniques of film as well as the ancient craft of oral storytelling, while remaining true to the necessities and immediacy of theatre.

I thank the writers whose work appears here, as well as the many other playwrights who submitted their scripts. I hope this collection may spark further productions, and perhaps a few heated discussions about our future, our country, and our theatre.

Other titles by Brian Drader

Other titles by Kenneth T. Williams

Other titles by Katherine Koller

Voices of the Land

The Seed Savers and Other Plays

Other titles by Frank Barry