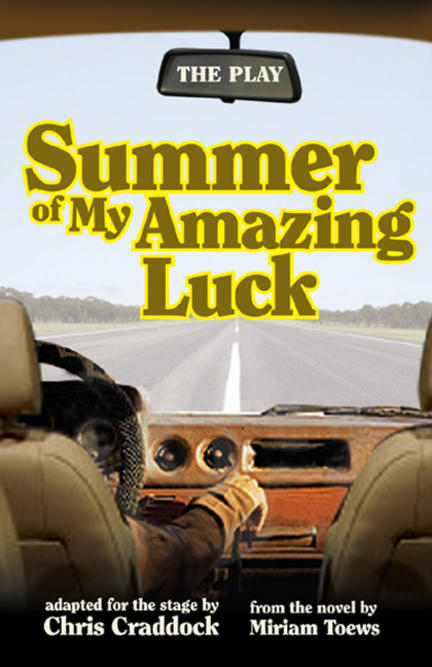 Summer of My Amazing Luck: The Play is the story of Lucy and Lish, two single mothers who live in the Winnipeg housing project, Have-a-Life. When her mother was murdered, Lucy "didn?t grieve properly," and tried to fill her emptiness with sexual encounters. When she became pregnant, she couldn?t really say who the father of her child was. Now Lucy and her infant son Dill are in Have-a-Life, trying to survive in the welfare system. Her best friend Lish has her own troubles. She pines for Gotcha, the street performer who stole her heart along with her wallet. So, Lucy decides to bring Gotcha back in a series of postcards. But maybe Lucy's made it too real. When Lish gets a postcard telling her Gotcha is heading to Denver, she decides they have to find him. They set out in a borrowed, old, beat-up van, full of toys and kids. With all the humour, compassion, and intelligence of Miriam Toews? novel, this inventive stage adaptation takes audiences on a hilarious and heartbreaking journey as Lucy discovers that this may be the summer when everything changes.

Excerpt: Summer of My Amazing Luck: The Play (by (author) Chris Craddock)

Lights up on Lucy and Lish in the van. Lish sits on the right side of the table, arms out, steering, a plunger sitting on the table, acting as the stick shift. Lucy sits in the passenger seat. She regards the audience.

LUCY: You probably think you're in a theatre right now, but you're not. You're in a van. You're in a van with two women and five kids. The van is in terrible shape, but it's going from Winnipeg, Manitoba to Denver, Colorado. How we got here is a long story. But isn't that what road trips are for? This story is full of kids, so I might as well start like thisŠ

... there was a little girl named Lucy. And when you're a little girl, you have all these dreams about how life is going to go, and it's easy to believe it, because nothing has happened to you yet. But it isn't long before stuff starts to happen, and happen, until it seems like life can only go a few ways, and all you can do is hope that one of them is good. You hope that things kind of assemble themselves, and that your life is fun and funny and lucky and good.

Mom and Dad appear behind the scrim. They pose as if for a family portrait.

One of the big things that happened to me, is that my Mom died, and I didn't grieve right. It made me have a void inside, and then I was promiscuous. If I had grieved right, my doctor said, if I had grieved right, I wouldn't've been sneaking out all the time to fill up my "void," and I wouldn't've been promiscuous. Being promiscuous means I had sex with all these guys, and then I got pregnant. I was really scared, being only seventeen at the time, with a dead Mom that I was grieving for all wrong ­

Mom and Dad regard each other as Mom disappears behind the scrim.

LUCY: — and a Dad who wasn't grieving all that good either.

Dad bows his head as the lights go out.

LUCY: I got pregnant, and then I had a son.

Lucy moves to her stroller and bends down to look at Dill.

LUCY: A beautiful son named Dill, who I love more than anything. See, Dill was the other big thing that happened to me, and then it was super clear what I had to do. I had to be the best Mom an 18 year old with a grade ten education can be. And I know there are women out there, who can work a full time job and raise their kids super well and keep a tidy house besides. I would love to be like that, like one of those formidable women, but I'm not, and I know that. I have a son, who I love, and he needs stuff. He needs a home with a crib and strained peas and a mobile that spins around and makes him smarter. He needs stuff and so do I. I thought I was totally screwed. But I wasn't. See, lucky for me, I live in Canada.

A gobo of the Canadian flag appears on the scrim. Lucy regards it with a double thumbs up.

LUCY: The best country in the world, a generous, bear hug of a country, where it's okay to be French, and we even save some of our left-over land for the Indians. Canada's not gonna let a baby starve, just because his Grandmother died and his Mother didn't grieve right. They got a net for people that fall down, sort of like a circus. A social safety net. And that's where I ended up, feeling just like a trapeze artist that falls.

A trapeze artist balances on the centre upstage stepladder, behind the scrim. She loses her balance and falls, only to be caught by the WELFARE GUY.

LUCY: That's where I am right now. In the social safety net of Canada. In the welfare office.