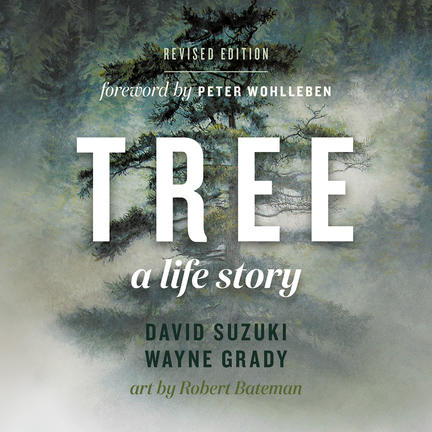 Now with a new foreword by Peter Wohlleben, the international bestselling author of The Hidden Life of Trees and The Inner Life of Animals.

The story of a single tree, from the moment the seed is released from its cone until, more than five hundred years later, it lies on the forest floor as a nurse log, giving life to ferns, mosses, and hemlocks, even as its own life is ending. This new edition has been updated and revised to reflect the effects of climate change on forests.

Peter Wohlleben is the author of several books about the natural world, including The Hidden Life of Trees, The Inner Life of Animals, and The Heartbeat of Trees. His books for children include Can You Hear the Trees Talking?, Do You Know Where the Animals Live?, and Peter and the Tree Children. A longtime former forester, Wohlleben runs a forest academy in Germany that supports sustainable forest management and teaches adults and children about the many wonders of the forest.

In this slight, lovely book, [Suzuki and Grady] tell the tale of one Douglas-fir tree that lived for more than five centuries. . . . Bateman’s misty drawings offer portraits of the tree’s companions - woodpeckers, eagles, mice, ferns - whose lives are more fleeting . . . This book is both a touching look at a single tree and an articulate testimony to nature’s cyclic power. — Publishers Weekly

“Read Tree. You will find wonder, magic and awe instead of the usual flight-or-fight responses elicited when we read about our ailing natural world. David Suzuki and Wayne Grady have hit exactly the right note.” — Globe and Mail

Other titles by Peter Wohlleben

The Power of Trees

How Ancient Forests Can Save Us if We Let Them

by (author) Peter Wohlleben
edited and translated by Jane Billinghurst

What's Wild Outside Your Door?

Discovering Nature in the City

by (author) Peter Wohlleben
edited and translated by Jane Billinghurst

The Secret Network of Nature

Trees, Animals, and the Extraordinary Balance of All Living Things— Stories from Science and Observation

Discovering the Trees and Woodlands of North America

The Heartbeat of Trees

Embracing Our Ancient Bond with Forests and Nature

Peter and the Tree Children

Can You Hear the Trees Talking?

Discovering the Hidden Life of the Forest

The Secret Wisdom of Nature

Trees, Animals, and the Extraordinary Balance of All Living Things -— Stories from Science and Observation

The Hidden Life of Trees

What They Feel, How They Communicate—Discoveries from A Secret World

Other titles by David Skulski

Stehpen Harper's Assault on Your Right to Know

A Short Introduction to the Life of the Commons

That Is How It Is

How Stephen Harper and his think tank colleagues have transformed Canada

The Art of Social Enterprise

Business as if People Mattered

Can Hens Give Milk? Read-Along

A Sack Full of Feathers Read-Along