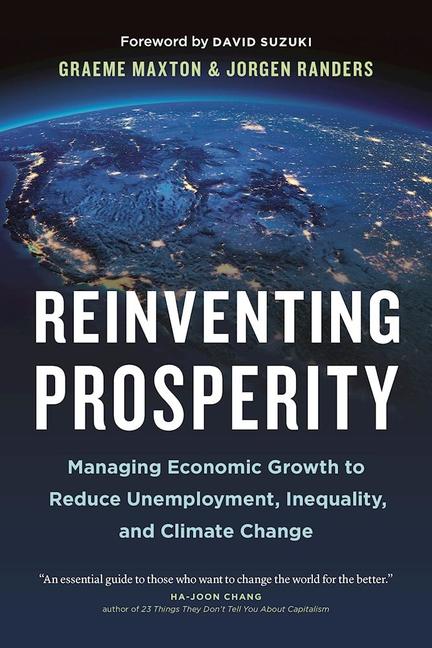 A persuasive economic argument that proves we can all live better lives in this finite world.

In Reinventing Prosperity, Graeme Maxton and Jorgen Randers offer a new approach with thirteen recommendations that should be possible to implement around the world. This book addresses the forty-year-old growth/no-growth debate by explaining how it is possible to reduce unemployment, poverty, inequality, and the pace of climate change and still have economic growth—if we want.

Graeme Maxton is the Secretary General of the Club of Rome and a former regional director of the Economist Intelligence Unit in Asia. He is the author of The End of Progress–How Modern Economics Has Failed Us, which was nominated for the Financial Times and Goldman Sachs Business Book of the Year Award.

Jorgen Randers is a professor of climate strategy at the Norwegian Business School, where he was president from 1981 until 1989. He is also a former Deputy Director General of WWF International and a co-author of the bestselling Limits to Growth.

"An essential guide to those who want to change the world for the better—and for certain." — —Ha-Joon Chang, Faculty of Economics, University of Cambridge, author of23 Things They Don't Tell You About Capitalism and Economics

"An important contribution to the global debate about growth, equality, climate change, and the path to a viable human future." — —David Korten, author of Change the Story, Change the Future

"A bold analysis smashing the doctrines of mainstream economics. Wonderful!" — —Ernst von Weizsäcker, Co-President of the Club of Rome

"Graeme and Jorgen’s groundbreaking book gets us 13 steps closer to the carbon-free economy by 2050." — —Mathis Wackernagel, Ph.D., Founder and CEO, Global Footprint Network

"A fascinating, data-rich look at some of the most fundamental questions our species has ever faced—and a striking argument for maturity over endless growth." — —Bill McKibben, author of Deep Economy

"This book has the power to induce policy changes that are imperative for the creation of an equitable, peaceful and sustainable future for human society." — —Rajendra K. Pachauri, Executive Vice Chairman, The Energy and Resources Institute (TERI)

"Leaving conventional economics behind, Reinventing Prosperity charts a careful course between the Scylla of economic collapse and the Charybdis of climate catastrophe. It is an urgent call to action!" — —Peter G. Brown, Economics for the Anthropocene Project, McGill University

"A must-read for anyone who wants to create a better world." — — Prof. Robert Costanza, The Australian National University

"Maxton and Randers bring a rare combination of insight, pragmatism and a global perspective to the challenge of managing economies in the 21st century." — —Peter A. Victor PhD. FRSC, author of Managing without Growth: Slower by Design, not Disaster