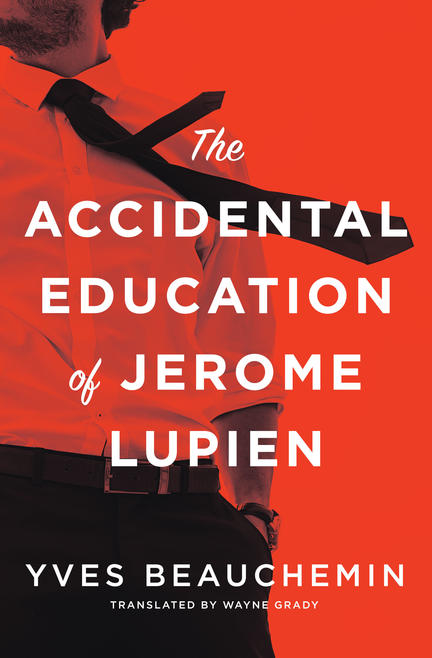 Student Jerome Lupien is swept up in a series of misadventures and criminal escapades in this portrait of a city infamously mired in the corrupt alliances of politicians, political lobbyists, and construction magnates. The school is unconventional, but the education singular.

Jerome Lupien — libidinous, unscrupulous, and fresh out of university — is ambitious and at loose ends. Whether on a hunting trip in the woods, on an escape planned in good faith to Cuba, or seeking to make his way in Montreal, Jerome cannot help but be embroiled in misadventures and underworld escapades. He is conned by the devious — a hunting guide, a low-life car salesman, and, ultimately, a well-to-do political lobbyist profiting from the city’s infamously corrupt partnership of politicians wielding remunerative contracts and the construction firms in cahoots. The unwitting (though frequently culpable) young man is enrolled, whether he knows it or not, in an unconventional and criminal school. And the education is singular, not only for Jerome, but also the reader.

The young man’s heady journey provides — as only Yves Beauchemin can do — an extraordinary, full, and trenchant portrait of class variety. Here is a mordant piece of social satire that is a marvelous entertainment and wonderfully traditional narrative too.

YVES BEAUCHEMIN is a mordant social satirist and one of the most pre-eminent Québecois writers of his generation. His novels include Charles the Bold, The Waitress of the Café Cherrier, and The Alley Cat, which was the bestselling French-Canadian novel of all time. He is also a children’s book writer and a member of the Académie des lettres du Québec. In 2011, he was awarded the Ludger-Duvernay Prize, which recognizes the outstanding contribution and societal influence of Quebec writers.

After taking a stab at political science and then psychology, Jerome Lupien finally found his true calling as a man of letters; he enrolled in French Literature at the Université de Montréal, and earned a B.A. that let him imagine a career in teaching, journalism, publishing, or some other related field. Upon graduating, he decided to reward himself for the remarkable feat of his having combined university studies with part-time work as a waiter in an Old Montreal café by taking a year off — the first several weeks of which he spent sleeping, living the good life, and windsurfing. He planned to top off his sabbatical year with a long hitchhiking trip through South America.

Then, towards midsummer, his uncle Raoul, who had become a partial invalid, gave Jerome his hunting equipment. As an adolescent, Jerome had gone on dozens of hunting trips with his uncle, so he was fairly familiar with guns — which, to his father, were an abomination. Jerome’s memories of those trips were filled with marvels that passing time had embellished. So, one afternoon, handling the rifles and carbines his uncle had sent him and seeing how assiduously oiled and polished they were, he was so moved that tears came to his eyes. A hunger for the hunt took hold of him and held on unrelentingly; come the night, he dreamed of going on safaris in shadowy forests in which he came face to face with herds of deer, moose, or caribou, which he would slaughter in a terrifying burst of gunfire, half blinded by the clouds of acrid smoke that made him cough and laugh at the same time.

He dedicated a weekend to courses — “Arms Management” and “An Introduction to Hunting” — in order to get his permit, which he received a month later. Yet, even with it, he felt he needed to have someone experienced with him on his first adult foray into the woods. And so, in early October, he’d surfed the Internet to look for a hunting guide, came up with Donat Pimparé, and the business was settled in no time.

It was Pimparé who suggested they get themselves to Maniwaki.

“I know it’s a bit far,” Pimparé had said, “and sure, there’ll be some expenses, but in the past five or six years I’ve found no better place for big game. I’ve never led a hunting party up there that hasn’t come back with an animal. If you don’t wanna come home empty-handed, pal, then Maniwaki’s the place to go.”

Fifty-eight-year-old Pimparé lived in Sorel and had accumulated a lot of experience as a guide. And since Jerome, two months earlier, had totalled his beloved Mazda in an accident from which he, fortunately, had escaped unharmed — other than three demerit points off his driver’s licence — Pimparé offered to drive them both up to Maniwaki in his minivan.

Which was what he would have to do, apparently. But without the moose.

Beauchemin’s considerable skills as a narrator of improbable events deployed along a plot line ingeniously constructed remain on full display here. As does his sharp eye for broad but sharp description of buffoons spouting farrago and bravado, and his ear for telling declamations that immediately undercut their alleged intentions —everything we have learned to expect from the master.

Beauchemin’s prose is amiable and fluid.

Other titles by Yves Beauchemin

The Years of Fire