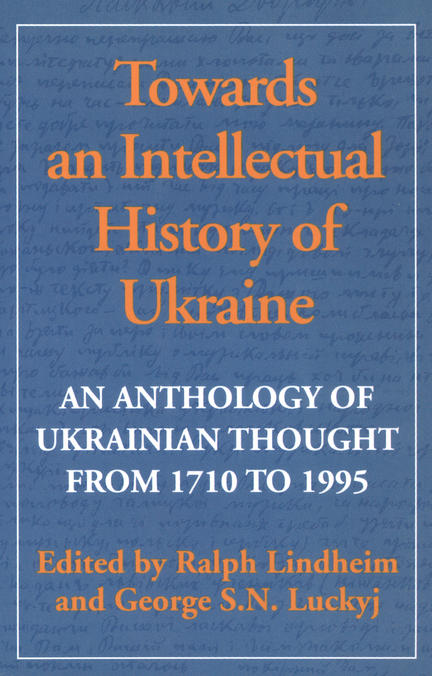 Together with a long introductory essay, the editors of this volume have provided a collection of major documents dating from 1710 to 1995. The texts, many of them translated for the first time and some perhaps unfamiliar to Ukrainian readers, explore issues that intellectual history has traditionally set out to examine and explain. They touch on religious, philosophical, aesthetic, ethical, sociological, historical, and political ideas, and thereby illuminate significant attitudes, values, ideological commitments, and systems of thought that have crystallized at central moments in the development of Ukraine. Leading Ukrainian writers, scholars, intellectuals, political figures, and statesman present their views on Ukrainian history, especially its relation to Russia, but also discuss their society, literature, and culture, as well as the slow but dramatic formation and growth of national identity.

These texts best reflect the transformation of Ukraine, and the obstacles to such a transformation, into a modern nation, which in 1991 declared its independence. They serve, therefore, as a guide to a complex period of hundreds of years, which, up to now, was too often considered only as a part of Russian history. In this context, the anthology contributes to an understanding of the past few centuries from a post-colonial perspective.

Ralph Lindheim is a member of the Department of Slavic Languages and Literatures at the University of Toronto.

GEORGE S.N. LUCKYJ is Professor Emeritus of Slavic Studies, University of Toronto. He is the author of Literary Politics in the Soviet Ukraine and Between Gogol and Shevchenko. He is also the editor of Shevchenko and the Critics, and translator and editor of Pavlo Zaitsev's Taras Shevchenko: A Life.

Other titles by Ralph Lindheim

Towards Intellectual History of Ukraine

Towards an Intellectual History of Ukraine

Other titles by George Luckyj

Towards an Intellectual History of Ukraine

Ukrainian Literature in the Twentieth Century

edited and translated by George Luckyj