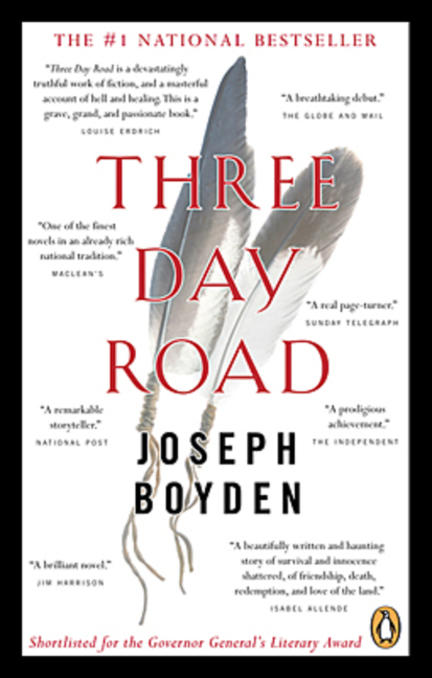 It is 1919, and Niska, the last Oji-Cree woman to live off the land, has received word that one of the two boys she saw off to the Great War has returned. Xavier Bird, her sole living relation, is gravely wounded and addicted to morphine. As Niska slowly paddles her canoe on the three-day journey to bring Xavier home, travelling through the stark but stunning landscape of Northern Ontario, their respective stories emerge—stories of Niska’s life among her kin and of Xavier’s horrifying experiences in the killing fields of Ypres and the Somme.

“It’s gripping, wrenching, eye-opening, illuminating, stirring, moral (not moralistic) fiction, rooted in closely observed fact…Boyden, like Homer in The Iliad, is precise and unflinching in his descriptions of the ways in which soldiers fall in battle…This novel is a remarkable achievement, and a breathtaking debut.” - The Globe and Mail

“The writing is minimalist, the characters vivid, the pace measured, the hold on the reader firm…This book will stir up controversy, win awards, hit bestseller lists, and spawn a feature film. Count on it.” - The Montreal Gazette

“Three Day Road, his first novel, will stand beside Timothy Findley’s classic The Wars as a moving account of the Great War from a Canadian perspective, but Boyden has delivered something new…The cinematic battle scenes blaze with intensity and the riveting climax of the boys’ friendship feels brutal and inevitable. It satisfies even as it shocks…the writing is glorious and shines with real immediacy…Boyden is a remarkable storyteller. Three Day Road is an unforgettable and valuable depiction of the aboriginal Canadian experience in the First World War and at home.” - The National Post

"You will never forget these two young Cree snipers plunged in the horror of the First World War, where the enemy was so close that one could smell him. A beautifully written and haunting story of survival and innocence shattered, of friendship, death, redemption and love of the land. The three protagonists, Xavier, Elijah and Niska will be in my heart forever. Please, please don't miss it!" - Isabel Allende

“Three Day Road is as fine a novel as I have seen during the five years I have been reading first novels. My prediction is that it will win every award for which it is nominated, and that it will become a Canadian and international classic.” - W.P. Kinsella, Books in Canada

“The extraordinary richness of Boyden’s prose and his material, both in the forgotten history he’s recovered and his electric metaphors, make Three Day Road one of the finest novels in an already rich national tradition.” - Maclean’s

“Three Day Road is a devastatingly truthful work of fiction, and a masterful account of hell and healing. This is a grave, grand and passionate book.” - Louise Erdrich

“Three Day Road is that rarest of books: It works on different levels for different readers. It can be enjoyed as a military history, a study of the tragedy of First Nations people in Canada or simply as a strong literary novel set again a First World War backdrop. Read it and see for yourself.” - The Vancouver Sun

“a tale that’s pure magic…Boyden’s braided stories twine together to a surprisingly gentle ending. There is death –many deaths –but there is also rebirth and beauty in this author’s passionate storytelling as in the world he describes.” - Straight.com

“Three Day Road [is] a stunning, epic story…has a greatness about it…” - Winnipeg Free Press

“This poignant tale weaves together magic, hubris and plain good storytelling, making it one of the best Canadian literature offerings of the season.” - The Calgary Herald

“Perhaps the most startling success of this book is the way it combines a tale of racial and cultural displacement with a mystic saga…. He guides us through immensely complex stories with subtlety and grace.” - Independent on Sunday

“There have been so many fine novels inspired by the First World War that to read one that is not just harrowing, but fresh, comes as a pleasant surprise…. (it’s) a fully rounded work of fiction which, after a quiet opening, develops into a real page-turner……. His portrait of an indigenous people who are, in their way, hunted to near-extinction is poignant and convincing.” - Sunday Telegraph

“Boyden strips away unnecessary embellishments and tells his story with the starkness and simplicity that does justice to the raw worlds of bush and trench. It is an absorbing read, with chilling, exhaustive detail about the butchery of animals and soldiers. But the net effect is rewarding – hallucinatory, even – as the reader is drawn into the Cree network of spirits, voices and stories.” - Scotland on Sunday

“It takes an exceptionally intense and clear vision for a writer to persuade us that there is anything new to be said about the Great War, now creeping steadily towards its centenary anniversary. Yet every now and then a book comes along (or, in the case of Pat Barker, a trilogy) that rescues from the mire and carnage a genuinely new perspective on the awful events of 1914-1918. Focusing on the rarely-told stories of indigenous people enlisted into the Canadian army, Joseph Boyden’s first novel, Three Day Road, is one such book……. What sets Boyden’s writing alongside other notable war novels is the way in which the fighting, for all the grim detail, does not dominate his other, broader themes. He succeeds in driving the narrative along with sufficient dramatic incident to satisfy his brothers, but what haunts the book are the more insidious developments offsetting the conflict in Europe.” - The Glasgow Herald

“Simply, beautifully, Boyden takes us into the minds and hearts of his characters. The result is an otherworldly reading experience…this is that rare novel that illuminates the past for the present – for all time, in fact.” - New Orleans Times Picayune

“Three Day Road is a compelling read, beautifully told, and timeless in its lessons.” - Rick Bass

“There are also lyrical moments which posses an eerie power - especially where Boyden writes about the northern landscape and the human relationship to it. He has illuminated a forgotten corner of the Great War and that, in itself is a prodigious achievement.” - The Independent

A beautifully-written book about two Native men from Northern Ontario who become snipers during the First World War. Told from alternating perspectives of one of the men and his aunt, a medicine woman in the far North. An incredibly important and beautiful book that everyone should read. One of the best books I've read in years.

Very good story, excellent ending, emotionally exhausting but worth it. Boyden's style is simple and profound. I would consider this a must read.

I loved this book when I first read it and am re-reading it for the third time. I recently attended Canada's History Forum - How should the Great War be remembered - And "Three Day Road" & "Rilla of Ingleside" were the most recommended fiction books to read to understand this war.

Books to Connect You to the Landscape