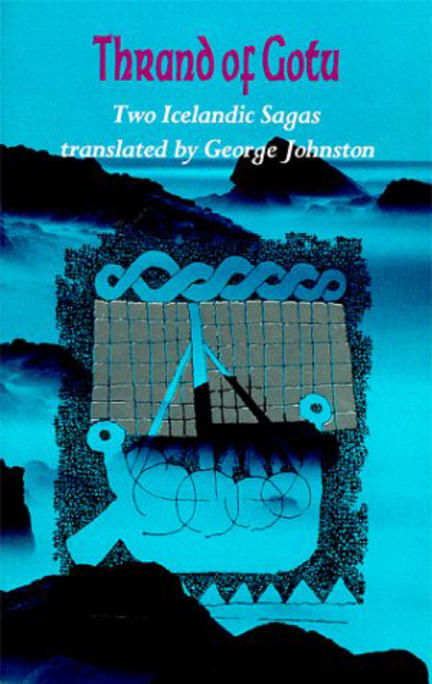 The two sagas of the Faroe Islanders and Greenlanders may be counted among the 'Sagas of Icelanders', though Icelanders play no part in the first and little in the second, and events in both are remote from Iceland. They may be so categorized on account of their style, which is that of sober history, and not less so when events that we would consider supernatural occasionally take place in them. Both have been assigned approximate dates of composition early in the thirteenth century, among the first sagas to have been written down, yet their narrative lines have the assurance of a fully developed art. Their stories are told with finesse, many events in Faroe Islanders are given a comic slant that seems sophisticated, and both have small casts and little clutter of genealogies. Thrand of Gotu, in Faroe Islanders, is the most fully developed character in either, and one of the more complex and memorable villains of European literature.

This beautiful book is a celebration of an ancient tradition, skilfully rendered for modern audiences by respected poet and scholar George Johnston. Johnston's second book of sagas, The Schemers and Viga Glum, is also now available.

'The chief success of Johnston's translation lies precisely in his ability to suggest the kinds of parody, burlesque, and dark comedy Thrand of Gotu depends on as the saga turns the audience's sympathies from a conventional hero, Sigmund Brestisson, a man whose prowess suggests Gunnar of Hlitharendi or Olaf Tryggvason, to Thrand of Gotu, a devious schemer, a wisely ruthless enemy more than a match in wisdom for Sigmund and for successive rulers of Norway, who in saga convention are wiser than their subjects, even including Icelanders.'

'To read Thrand of Gotu is to find delight in darkness, to be compelled to take a wise scoundrel's part against an admirable but discerning hero, to find one's definition of the admirable and the shameful challenged, to be continually presented with clearly stated matters which prove enigmas in disguise, to find both the facts and the ethical judgments one would make about them in doubt. Thrand of Gotu is a saga for our time too. The book is a model of excellence in design and production. George Johnston and the publisher deserve many readers and strong sales.'

'Thrand of Gotu transports the reader back in time to a period of travel and discovery.'