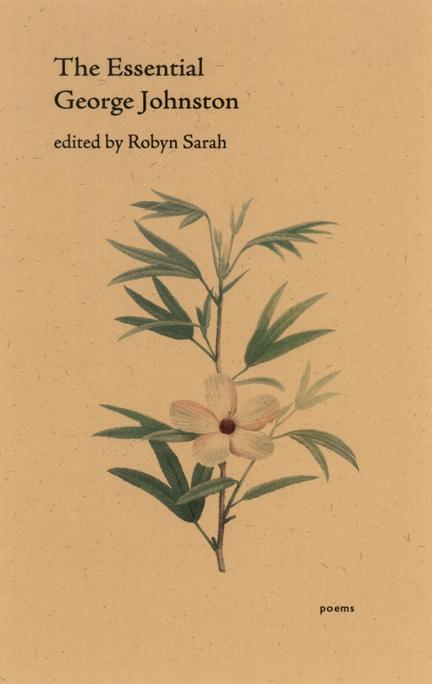 George Johnston is one of the most finely tuned poets we have had -- a master watchmaker who can also build Big Ben.

'Among the recent and much-hyped rebootings of various reputations -- including Crane's, Spicer's, and O'Hara's -- this slim thing, The Essential George Johnston (the inaugural edition of a new series on Canadian poets), is an unpretentious, 64-page relief. There is nothing romantic about Johnston's obscurity. Until his death in 2004, he was an exacting poet who wrote about the unfashionably everyday, with an attention to form (both fixed and free-ish) that was rigorous but natural. He published in the New Yorker, and taught, but was no careerist; if the poem wasn't fully realized and utterly essential he didn't write it. This pared-down selection -- smartly arranged by another exacting Canadian, Robyn Sarah -- is itself all-business, right down to the elegant but unfetishizable cover, a no-frills affair that forces you to turn to the poems -- real poems -- without delay. Okay, it came out in 2007, but nevermind the copyright date; it's still the best book of the year.'

'Johnston's diction tends to be simple and his phrasing elegantly spare, though he occasionally upends syntax for the sake of levity or musicality. A poet of small but resonant moments, he's particularly drawn (as Sarah points out) to the cycle of life as manifested in the natural world and human affairs. Even with weighty subjects, he has a light touch. Some of the most affecting poems here are meditations on mortality; there's an appropriate gravity, but the poems aren't sombre.'

'Many of the poems in The Essential George Johnston are similarly ambiguous and ever so slightly unsettled. [Editor Robyn] Sarah is a dab hand; she has avoided Johnston's longer verse and his translations. Only a couple of poems starring his troupe of everymen -- homier takes on Eliot's Prufrock and Kees's Robinson, which appeared in Johnston's early collections -- have been included. What's left are some forty-eight pages of the poet's better poems: the slightly darker, richer stuff. Not that Johnston's body of work was in dire need of pruning. He took poetry seriously enough not to publish very much of it, and put out a collection something like every six years. Plus, each installment in the Porcupine Quill's ''Essential Poets'' series tops out at a humane forty-eight or so pages, which one can not only get through but imagine rereading. Sarah's sharp editing simply brings a series of unsentimental and utterly essential set pieces into vivid relief: a suicide's hat makes its way out to sea; a cat toys with a baby bird; a man, considering straw smoke, imagines his cremation.'

'Robyn Sarah's The Essential George Johnston offers a first-rate introduction to Johnston's poems through a condensed and careful collection of finely-honed rhythms and images. These poems are traditional and original, crafted and self-consciously unstable. Expressing an epistemology of post-Einsteinian timelessness, the formal lines are subtle, truthful, and profound. They lack entirely the ego and ostentation which creep into much of contemporary poetry. The opening poem, 'Pool,' with its rhyming iambic tetrameter quatrains, establishes key themes of the volume: the interplay of subjectivity and perception, and the subject's existential experience of the world. As in Jay Macpherson's The Boatman and James Reaney's A Suit of Nettles, Johnston's attention to craft mirrors a sense of visionary possibility, one exciting legacy of a Frye-influenced generation of poets.'