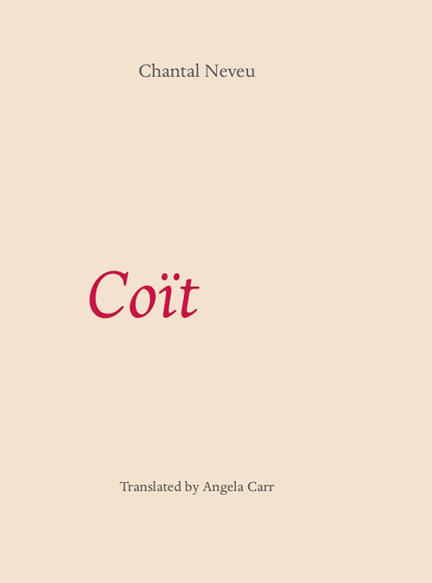 In Coit, minimalist traces of language cling to a series of mapped channels. Every channel is a tenuous archive of choreographed gestures recorded by the poet from the edges of dance stages. Here, spaces hold words and words hold movement. A book marked by inexhaustible passages, this exquisite English-language translation of QuŽbŽcoise poet Chantal Neveu's fourth book invites the reader to collaborate in the making of both texts and spaces. Here, Co•t refers not only to coitus but to the act of moving in unison. Conceptual and intimate, Co•t is a consensual experiment that exceeds the form of the book.

A minimalist text with a myriad of openings, this English-language introduction to the writing of QuŽbŽcoise poet Chantal Neveu is a meticulously staged language event. In Coit, comingling strands of text bring proximity and adjacency into relief as sites of articulation. A spectacular intervention in a carefully constructed conceptual field.ï??- Kate Eichhorn

Poet and translator Angela Carr is the author of two poetry collections, most recently The Rose Concordance (2009), and several chapbooks, including Risk Accretions. Selections from her new work in progress, Here in There, have recently appeared in New American Writing, The Lana Turner Journal of Poetry and Opinion, and Canada and Beyond: A Journal of Canadian Literary and Cultural Studies. She has published and performed her work internationally. A doctoral student in Comparative Literary and Media Studies at the University of Montreal, Angela currently divides her time between Montreal and New York City.

Other titles by Angela Carr