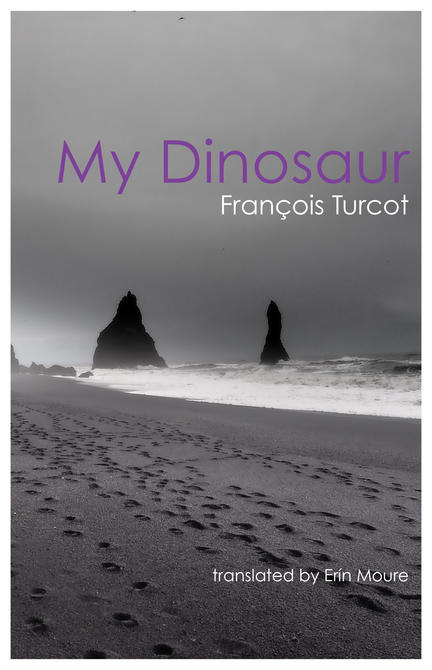 The figure of the father occupies a particularly significant place in Quï??bï??coise literature--there's a real fascination with fathers, and this recurring persona populates fiction, films, and the stories people tell of their families and themselves.

Thus, it's not surprising that, as he witnessed his own father's frailty, Franï??ois Turcot--one of Quebec's most celebrated young literary voices--would write his own dedication to his vanished father, entitled My Dinosaur. In this, his first collection of poems to be published in English (and translated by renowned poet Erï??n Moure), Turcot excavates, reconstructs, and pays tribute not just to the father, but also to the figure of the son, and to writing itself as key to story, emotion, memory, and history.

The dinosaur of My Dinosaur is that of the distant father, sought in mourning, by the son. With luminous and lucid writing, Turcot excavates the fossil gaze of his father, in an elated elegy composed of poems both tensed and open, minimalist and talkative, serious and droll, alternating the voice and writings of the father with the fictions and assemblies of the son--reminding us that a man's story can only be told by assembling the shreds and bits that we've accumulated over the course of our lives. As prolonged metaphor for all disappearances and for the endurance of memory, Turcot's meticulous assembly in My Dinosaur is a tribute to all our Dads.

Turcot's surprisingly light and wryly humorous poems will resonate deeply with readers who are inquisitive about the role of family and memory in the construction of identity and self. Scholars who are exploring literary work on grief, and anyone who has lost a parent and felt grief but also curiosity about their lives will connect with Turcot's reflections in My Dinosaur. And finally, fans of the poetics and translation practice of Erï??n Moure will delight in this new work that has earned comparisons to Moure's own elegiac work in Kapusta (Anansi, 2015).

Montréal-based poet and teacher François Turcot is the author of Mon dinosaure (2014; finalist for the Prix du Festival de poésie de Montréal), Cette maison n'est pas la mienne (2009; winner of the Prix Émile-Nelligan), Derriegrave;re les forêts (2008; finalist for the Prix Émile-Nelligan), and miniatures en pays perdu (2006). His poems can be found in English and French in New American Writing, Aufgabe, dANDelion, Action Yes, filling Station, Estuaire, and Exit, and his articles in the Cahiers littéraires Contre-jour. His poetry has been translated into English, German, and Polish. My Dinosaur is his first book translated into English.

Erín Moure is a Montréal poet and translator curious about what's active in the poetry of others. Moure's most recent books are Kapusta (2015) and Insecession, a biotranspoetics published in one volume with her translation from Galician of Chus Pato's biopoetics, Secession (BookThug, 2014). Other recent translations include White Piano (2013) by Nicole Brossard, translated with Robert Majzels from the French, and Galician Songs (2013) by Rosalía de Castro, translated from the Galician.

On Our Radar: The Mystery Month Edition

"On Our Radar" is a monthly 49th Shelf series featuring books with buzz worth sharing.