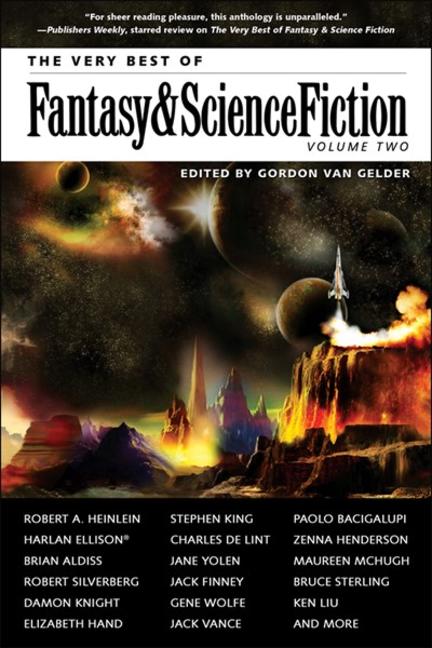 A mutant baby goes on a rampage through Central Park. An immigrant reveals secrets in the folds of a perfect gift. Lucky Cats extend their virtual paws to salute a generous revolution. The Internet invades a third-world village.

The premier speculative-fiction magazine Fantasy & Science Fiction continues to discover and showcase many of the most inventive authors writing in any genre. Now drawing even more deeply upon F&SF’s impressive history, this extraordinary companion anthology expands upon sixty-five years’ worth of top-notch storytelling. The Very Best of Fantasy & Science Fiction, Volume Two is a star-studded tribute to the continuing vision of F&SF.

Excerpt from "The Paper Menagerie" by Ken Liu

One of my earliest memories starts with me sobbing. I refused to be soothed no matter what Mom and Dad tried.

Dad gave up and left the bedroom, but Mom took me into the kitchen and sat me down at the breakfast table.

She set the paper down, plain side facing up, and began to fold it. I stopped crying and watched her, curious.

She turned the paper over and folded it again. She pleated, packed, tucked, rolled, and twisted until the paper disappeared between her cupped hands. Then she lifted the folded-up paper packet to her mouth and blew into it, like a balloon.

A little paper tiger stood on the table, the size of two fists placed together. The skin of the tiger was the pattern on the wrapping paper, white background with red candy canes and green Christmas trees.

I reached out to Mom's creation. Its tail twitched, and it pounced playfully at my finger. "Rawrr-sa," it growled, the sound somewhere between a cat and rustling newspapers.

I laughed, startled, and stroked its back with an index finger. The paper tiger vibrated under my finger, purring.

I didn't know this at the time, but Mom's kind was special. She breathed into them so that they shared her breath, and thus moved with her life. This was her magic.

?If you like quality short fiction and you’re looking for an anthology that collects together stories both old and new, I’d warmly recommend that you check out The Very Best of Fantasy & Science Fiction, Volume Two.”
?SF Crowsnest

?The first [was] an all-star anthology, the second, also edited by Gordon van Gelder, possesses just as much impact, history, and sheer enjoyability, and is a welcome retrospective of one of the genre’s bastions.... Just a superb anthology.”
?Speculition

?Gordon Van Gelder is the current editor of The Magazine of Fantasy and Science Fiction, and as with his earlier volume of this series, has put together a killer anthology of the very best from F&SF.”
?Galaxy’s Edge

?Van Gelder set out to provide a taste of some of the most renowned speculative fiction authors over the last half-century, and he succeeded brilliantly”
?Book Likes

?...a collection of some of the best sci-fi and fantasy short stories out there.”
?Starburst

?This is an excellent place to see not only gems from Fantasy and Science Fiction, but also great stories from over 60 years of the field.
?Tangent

?This is the second part of an anthology of incredible short stories edited by Gordon van Gelder (who has won two Hugo’s for Best Editor, Short Form). The stories themselves are, purposefully, incredibly varied. Some are funny, others heartbreakingly sad and others thrilling. The common thing across the board is that these are excellent stories.”
?World of Books

?The Very Best of Fantasy & Science Fiction, Volume 2 is a great addition to any reader’s library because it chronicles the genres’ changes over time. All of the stories are enjoyable....”
?Lit Reactor

?If the previous two anthologies had heavy-hitters, this one has legends: Brian Aldiss, Paolo Bacigalupi (the remarkable “The People of Sand and Slag”), Jack Finney, Elizabeth Hand, Robert A. Heinlein, Stephen King, Kit Reed, Robert Silverberg — oh, hell, why bother listing them? The stories in this book are so good (and surprisingly, many of them are funny) that you need to buy it. “
?Lit/Rant

“The Very Best of Fantasy and Science Fiction, Volume 2, edited by Gordon van Gelder is a book that can’t help but appeal to anyone who already loves the genre and is a great way to introduce great science fiction and fantasy to new readers.”
—Looking for a Good Book

Praise for The Very Best of Fantasy & Science Fiction

"A landmark anthology"
?The Guardian

"For a long time, F&SF has been a leader in expanding the terrain of speculative fiction. Judging from this volume, it intends to continue in this role.
?Booklist

"It's obvious why F&SF has thrived while competitors have vanished. Eloquent, scintillating, often sublime."
?Kirkus

"Half an hour's reading, and I spent the next day or so catching myself staring off into space muttering, 'Oh wow.'"
?io9.com

Other titles by Stephen King

Letters of an RCAF Navigator