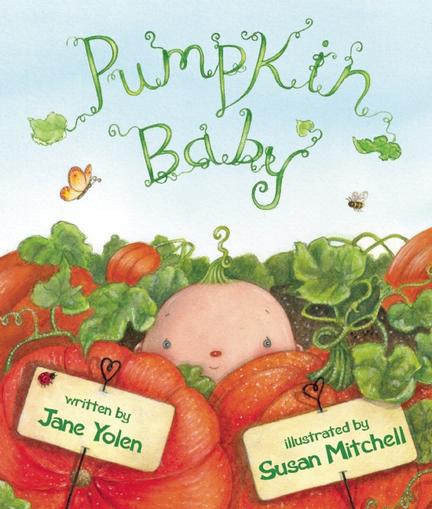 &ldquo;I thought about a pumpkin baby.
Would it be orange on the outside?
Would it be too heavy to pick up,
too round to run and play with me?
Would I,
could I,
ever love a pumpkin child?&rdquo;
In Pumpkin Baby, a young child with an active imagination comes to terms with the imminent arrival of a sibling. As she and her mother move through their days--trips to the family farm, a meeting with the mailman--the young girl imagines a host of babies, each with their own unique characteristics and flows. A pumpkin baby might be too round, a stork baby could fly away. How on earth will she be able to love such a child? IN the end, however, the real-life baby is nothing like she'd expected, and everything she'd hope he would be.
Gently and lovingly told by Yolen, and wonderfully illustrated by Susan Mitchell, Pumpkin Baby is a perfect addition to the family library that&rsquo;s expecting a new cardholder.

Susan feels very fortunate to work full-time as an illustrator, with 18 published titles, including Reaching with Kids Can Press. When she is not drawing or painting, she loves to sew and make soft toys that resemble her illustrations. She also loves to visit schools to talk about her illustration process and hopes that she inspires some children to become illustrators when they grow up.

Other titles by Susan Mitchell

A Watery World of Wonderful Creatures