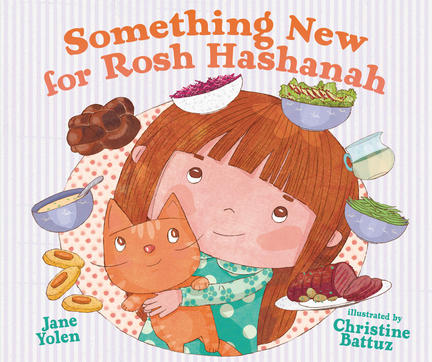 Becca refuses to try any news foods, until her family persuades her that Rosh Hashanah, the Jewish New Year, is a time to try something new. While dad suggests shaving off his mustache for a new look, and mom thinks she'll take up knitting as a new project, Becca decides she's ready to try something new, too!

CHRISTINE BATTUZ was born in France and received her Masters of Fine Arts at the Academy of Fine Arts of Perugia in Italy. She has illustrated over sixty books for children, and has taught art to children of all ages. She lives in Bromont, Quebec.

"PreS-Gr 1-''Rosh Hashanah starts tonight,' Mama says with great delight. 'Perhaps tonight you'd like to risk it with a taste of Bubbe's brisket?'' Yuck. Becca doesn't like to try new foods. She says 'no' to anything that tastes like meat and 'ick' to green things. She turns down all the traditional holiday dishes, including noodle kugel and honey cake. But when Dad announces that he's going to shave off his mustache and Mom decides to take up knitting, Becca is inspired to start the Jewish New Year by trying something new, too: one big green bean. Of course, she discovers that she likes it and promises to try gefilte fish next year. Repetitive, rhyming text, combined with speech bubbles, makes this a fun read-aloud. The cheerful, bright illustrations, with varied patterns that add texture, focus mostly on Becca, a white child, and her cat, with a couple of appearances by Mom and Dad. The holiday candles, shofar, special round challah, and traditional apples and honey appear in the illustrations but are never mentioned in the text. An outhor's note provides additional information about Rosh Hashanah; however, the focus is on Becca and the food, making the story most appropiate for readers already familiar with the holiday. Pair with Deborah Heiligman's Celebrate Rosh Hashanah and Yom Kippur: With Honey, Prayers, and the Shofar for more information about the meaning, rituals, and practices of the holiday. Or use with Russell Hoban's Bread and Jam for Frances, Lauren Child's I Will Never Not Ever Eat a Tomato, or Helen Cooper's Delicious! to provide even more encouragement to picky eaters.

Other titles by Christine Battuz

What If Bunny's NOT a Bully?

My Teacher's Not Here!