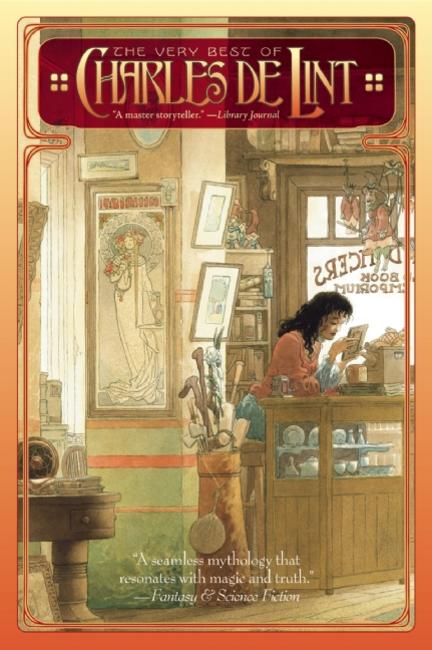 The finest stories of this popular pioneer of urban fantasy and creator of the mythical city of Newford have been chosen by the author?and his fans?and gathered in this extraordinary collection. Asked to suggest their own favorite stories for inclusion, de Lint’s fans have been instrumental in creating a treasury that will spark the imaginations of readers of all ages. These are retold fairy tales and new modern myths that thoroughly redefine the boundaries of magic.

Between these pages are all manner of enchanted characters in unusual places: playful Crow Girls who sneak into the homes of their sleeping neighbors, a graffiti artist who risks his life to expose a deadly conspiracy, and an unrepentant trickster who throws one last party to reveal a lost folkloric tradition.

At turns unexpected, whimsical, dark, and mystical, this is an essential compendium of timeless tales to be revisited as often as the heart desires.

?It’s hard not to feel encouraged to be a better person after reading a book by Ottawa’s Charles de Lint.”
?Halifax Chronicle Herald

?Charles de Lint is the modern master of urban fantasy. Folktale, myth, fairy tale, dreams, urban legend?all of it adds up to pure magic in de Lint’s vivid, original world. No one does it better.”
?Alice Hoffman

?[de Lint] is a master storyteller.... [I]n every story?and I do mean every?he manages to pack an emotional wallop, and a sense that the fantastical could be very, very possible if only we choose to believe it so.”
?Bookgasm

?More than 400 pages of the finest urban fantasy fiction of the past three decades.”
?Ottawa Citizen

?Lovely and quite diverse...[t]his is a collection definitely worth picking up.”
?San Francisco/Sacramento Book Review

?These are stories for those who love reading.”
?Locus

?De Lint is prolific, and if you’ve resisted picking him up because you’re not sure where to start, this is an excellent way to get a feel for his polished prose, his deep empathy for his own characters, and a wondrous world that may be filled with danger but is no less beautiful because of that.”
?Bookgasm