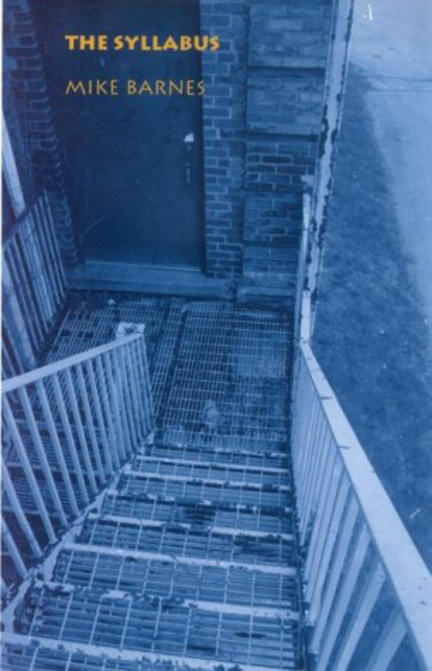 With section titles like 'e-mails to the coast', 'Accelerator', 'Decelerator', and 'Postscript: Three Teachers', the narrator of The Syllabus -- M -- digresses, fantasizes, catalogues and invents, slowly recovering the strands of childhood exploration and adolescent obsession, joy and morbidity, that have led him to both alienation and freedom. First friend, first love, first sex, inklings of vocation: all of the elements of the Bildungsroman are here, but put in a high-speed blender that tracks the hallucinatory smears they leave on the mind. Using a collage-like technique that mixes times and genres -- flashing forward and backward in a narrative that is, by turns, confessional, meditative, lyrical and comic -- The Syllabus traces the crooked path by which one student makes his way through, and beyond, the proscribed syllabus.

The opening of The Syllabus:

(or just: are you serious?)

i see what you mean about the 'memory tree', endlessly branching into stems, leaves, roots -- or directories and subdirectories, as you say, the computer analogy. that could be interesting.

but it also has the potential -- no? -- to lead to total meltdown. uncontrolled revisitings, associational rampages. chaos, in short.

and we both know what that could mean.

'Toronto's Mike Barnes drew some very favourable notices for his 1999 debut story collection, Aquarium. Now he's accepted quite the challenge in attempting to marry the techniques of collage and the lower-case nature of e-mail writing into a sustained novel. Don't fear, Barnes' The Syllabus ... does have a plot. Our troubled narrator, dubbed simply 'M', is asked by a psychologist to help him research the nature of memory by revisiting his own youth and reporting the results via the Internet.'

'This is a funny book. There are moments of pure childhood stupidity and ignorance that made me laugh out loud. Particularly hilarious is a moment when a boy in high school, determined to get back at the person who is stealing his lunch, carefully empties an Oh Henry chocolate bar of its ''solid core of caramel'' and refills it with lead shavings, cat excrement, litter and other awful things. He then seals the chocolate bar back up and delights in imagining the victim's response to the first bite: ''One stupefied grunt when the taste cuts through the sugar, then bleats and yelps rising to a terrified crescendo, subsiding (very, very slowly) to the deep anguished lowing of a gored steer.'' '